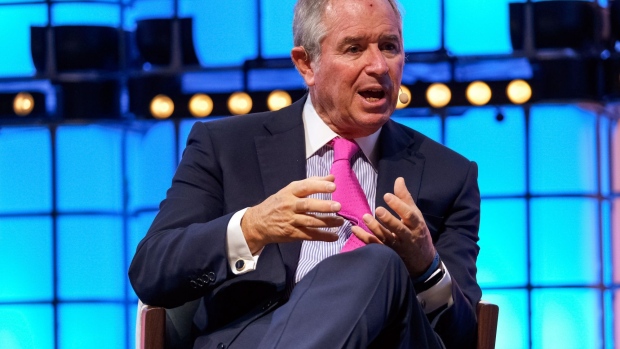 Jared Kushner, son-in-law of former US President Donald Trump, inside the Congress Center on the opening day of the World Economic Forum (WEF) in Davos, Switzerland, on Monday, May 23, 2022. The annual Davos gathering of political leaders, top executives and celebrities runs from May 22 to 26. , Bloomberg

Blackstone Inc. Chief Executive Officer Stephen Schwarzman played a pivotal -- and, until now, little-known -- role in securing a 2018 agreement between Donald Trump and Justin Trudeau to preserve free trade among the US, Canada and Mexico, according to Jared Kushner.

The buyout mogul’s intervention took place in late September 2018, on the sidelines of the United Nations General Assembly meeting in New York, the former president’s senior adviser and son-in-law writes in his new book “Breaking History: A White House Memoir.” The 512-page book is set for release on Aug. 23, and portions of it were shared in advance with Bloomberg News.

The US had reached an agreement the previous month with Mexico, but remained at odds with Canada over access for US dairy producers to the protected market of America’s northern neighbor. Kushner knew that Schwarzman was planning to meet with Trudeau.

“Please let the prime minister know that his negotiators are about to blow up a US$600 billion trade relationship over butter,” Kushner recalls telling the Blackstone chairman, co-founder and CEO, feeling that Canadian Foreign Minister Chrystia Freeland was holding out. “They are playing chicken with the wrong guy. Trump would be thrilled to go forward with Mexico and impose tariffs on Canada. He made a promise to the dairy farmers, and he isn’t going to budge.”

Schwarzman called Kushner back a few hours later to say that he’d delivered the message, that Trudeau understood it and that the prime minister had instructed his team to make a final offer, according to the book.

A representative for Blackstone declined to comment. In a 2019 book of his own, Schwarzman wrote that he “had the unusual opportunity to serve my country as we negotiated new trade agreements with Mexico and Canada.” He was awarded the Order of the Aztec Eagle, Mexico’s highest honor for foreigners, in 2018.

Kushner writes that Enrique Pena Nieto, then Mexico’s president, also had a conversation with Trudeau around the same time, telling him that if Canada didn’t make a deal with the US, then Mexico would sign its own deal without Canada, leaving the nation out of the planned successor to the 25-year-old North American Free Trade Agreement.

Trudeau agreed to terms that gave US dairy farmers expanded access to Canada’s market, and the US-Mexico-Canada Agreement, known in America as the USMCA, moved forward with all three countries, preserving the highly integrated regional economy and annual trade of more than US$1 trillion.

Kushner’s book describes “what happened behind closed doors during the Trump presidency,” according to publisher Broadside Books. From his White House office, Kushner “operated quietly behind the scenes,” Broadside says. “Now, Kushner finally tells his story,” the publisher says, covering his role in a variety of national and global issues, including production of Covid-19 vaccines and Middle East peace talks.

In another excerpt shared with Bloomberg, Kushner details how the USMCA representative of Andres Manuel Lopez Obrador, then Mexico’s president-elect, in August 2018 made one of the worst negotiating errors that Kushner had ever seen.

At the negotiating table at the Office of the US Trade Representative in Washington, Kushner began to present a US offer on the so-called sunset clause relating to the agreement’s expiration.

The US was fighting to get Mexico and, later, Canada to accept the sunset clause. Neither wanted it, saying it would create uncertainty for investors. The Trump administration thought that it would reduce the incentive for companies to move jobs abroad.

Jesus Seade, who had been tapped by the Mexican leader known as AMLO, who had been elected the previous month but wouldn’t take office until December, interrupted with his own offer that was far more advantageous for the US -- and harmful for Mexico -- than the offer Kushner was just about to make.

Unbeknown to Seade, Kushner and Mexican Foreign Minister Luis Videgaray, long a top adviser to Pena Nieto, had already worked together to agree on an expiration after 16 years, Kushner recalls. Seade interrupted Kushner’s introduction of that deal to suggest a 12-year expiration. The potentially shorter lifespan favored US objectives at the expense of Mexico.

Kushner, Videgaray and Pena Nieto’s economy minister, Ildefonso Guajardo, then privately constructed a fake negotiation to have Guajardo ask for 18 years, so they could then arrive back at 16 years, Kushner writes. Kushner and Guajardo then played out the mock negotiation in then-US Trade Representative Robert Lighthizer’s office in order to get back to the agreement originally reached between Kushner and Videgaray while allowing Seade to save face, according to Kushner.

“After the Mexican delegation departed, Lighthizer and I looked at each other and laughed,” Kushner writes. “That was one of the worst negotiating moments either of us had ever seen. ‘Just remember,’ Lighthizer said, ‘no one gets smarter by talking.’” Kushner writes that the exchange demonstrated the first rule of negotiation: always let the other side go first.

Guajardo, now a representative in Mexico’s lower house of congress, had earnestly been seeking an 18-year expiration in the talks, but needed to accept Kushner’s original 16-year proposal after Seade’s suggestion for a shorter term, he said in an interview Wednesday.

Seade, in a separate interview Wednesday, disputed Kushner’s characterization of the negotiations, saying that the proposal he offered on behalf of Lopez Obrador involved periodic reviews of the agreement linked to its expiration, with the clock resetting on its expiration date with each renewal.

“The central point of the proposal I submitted, representing the government-elect team from the Mexican side, was to combine the extension of the deal with those reviews -- now with teeth, directly linked to the extension,” Seade said. The proposal was intended to “respond to the US side’s complaint about Nafta that it had been an agreement negotiated forever,” he said.

Seade, a veteran of academia, the International Monetary Fund, the World Bank and the World Trade Organization, went on to become a deputy foreign minister in the Lopez Obrador government and has served since last September as Mexico’s ambassador to China. Lopez Obrador last month said that he has asked Seade to help Mexico respond to a US complaint that Mexico’s nationalist energy policy violates the USMCA.