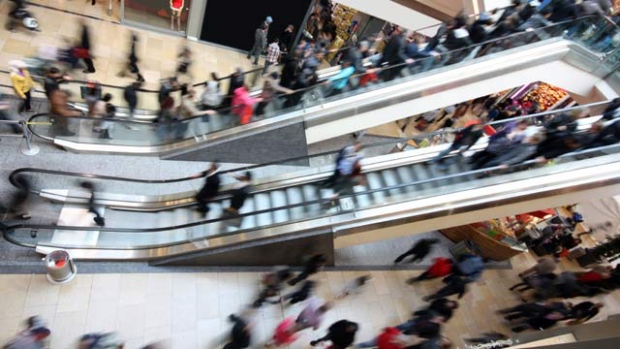 The 0.5 per cent decrease was worse than economists' expectations for retail sales to be unchanged, while November data was revised slightly higher for a gain of 0.3 per cent from the originally reported 0.2 per cent.

December's decline, the biggest since March, was widespread, with nine out of 11 sectors posting lower sales. Purchases at motor vehicle and parts dealers were down 0.9 per cent due to less spending at new car dealers, which offset increases elsewhere in the sector, including auto parts stores and used car dealers.

“Canadians are carrying record levels of debt and for some consumers they may be beyond their breaking point with their debt management. The reality is, if you have to decide between paying your bills or buying gifts, you should choose the former,” Jeffrey Schwartz, executive director, Consolidated Credit Counseling Services of Canada said in a report.

“With many Canadians at or beyond their tipping point with debt, they may not have been able to shop-and that’s not necessarily a bad thing." 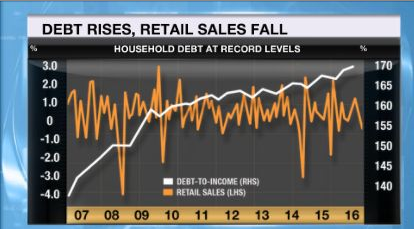 But BMO's Director and seior economist thinks there's more to the numbers than 'payback' for a few strong months.

“I think what’s at play here in this weak December number is not just payback from the strength earlier, it’s also reflecting the fact that Canadian households have racked up a bit of debt – especially in the Toronto and Vancouver regions where house prices have gone up a lot. Families have taken on more debts to get into the market. So I think that ultimately is restraining Canadian consumer spending,” Sal Guatieri told BNN Wednesday.

Sales were also weaker at stores typically tied to holiday shopping. Clothing purchases tumbled 3.7 per cent, while sales at electronics and appliance stores fell 2.3 per cent.

General merchandise store sales were down 1.3 per cent, the second month of declines in a row.

Stripping out the effect of price fluctuations, December's sales volume was down 1.0 per cent. The retail figures bucked the trend of recent data pointing to a firmer economy in December and could temper growth expectations for the month.

Sales were up 3.7 per cent for 2016 overall, the biggest increase since 2014, with volumes up 2.5 per cent. Consumer spending has helped underpin the economy in recent years, though that has served to drive household debt compared to income to a record high.