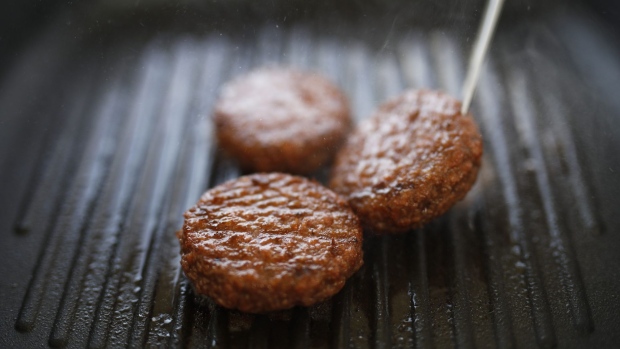 Animal-free vegan meat patties are grilled in the laboratories of Redefine Meat Ltd., in Ness Ziona, Israel, on Monday, Nov. 18, 2019. Startups such as Redefine Meat and their backers say that 3D printing promises to give diners the same sensory experience as eating a real T-bone or rump roast. Photographer: Corinna Kern/Bloomberg , Bloomberg

(Bloomberg) -- An Australian startup that’s developed plant-based meat that bleeds like the real thing has obtained extra funding as it plots expansion into Europe and China.

V2food has raised an extra 45 million euros ($53 million), bringing its total Series B funding round to 92 million euros, the company said in an emailed statement. It also plans to invest in research and development and add products including “beef” made with “heme,” an iron-containing component that gives products their meaty look and flavor.

“The Holy Grail for plant-based meat is to get the right taste and the right texture so that it really does deliver for meat eaters,” Nick Hazell, founder and chief executive officer at V2food, said in an interview. “That’s the big opportunity.”

Demand for alternative proteins has been booming as environmental and health concerns push consumers to opt out of animal products. That’s attracting investors and food giants like Nestle SA and McDonald’s Corp. Still, prices for faux meat remain relatively high, and there’s room for improvement in terms of quality, stoking competition among start-ups.

V2food has patented its heme, which -- like all of its products -- doesn’t contain genetically modified ingredients, according to Hazell.

Having a non-GM product may give the company a competitive advantage in certain markets. Impossible Foods Inc., whose eponymous burger contains genetically modified heme, hasn’t made inroads into Europe and China, known for their stringent regulations.

“We believe there is another way of doing this,” Hazell said. “It’s something rather brilliant and we are proud of where we got to.”

Brussels-based impact fund Astanor Ventures led the top-up of the most recent funding round, with other investors including China Renaissance and Main Sequence. The B round in October drew money from Goldman Sachs Group Inc. and Temasek Holdings. V2food raised 22 million euros in its Series A funding in 2019 two years ago.

V2food is already present in Australia and Asia-Pacific, offering products such as faux beef, pork, burgers and sausages. In China, it’s in the process of showcasing its products including plant-based pork mince, developed specifically for the market.