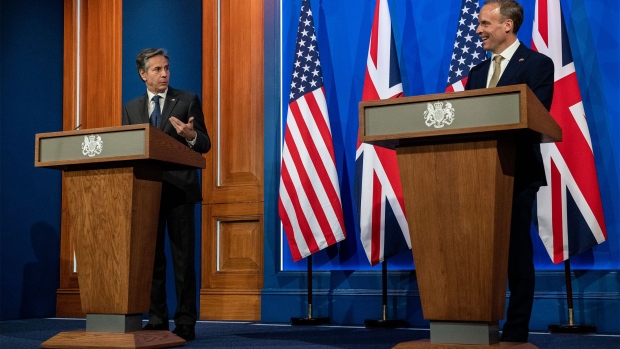 (Bloomberg) -- The top diplomats from the U.S. and the U.K. pushed back against what they called Chinese and Russian violations of the global order, pledging unity in what both nations call a priority: uniting democratic societies against autocratic ones.

“What we are trying to do is to uphold the international rules-based order that our countries have invested so much in,” U.S. Secretary of State Antony Blinken said at a briefing in London alongside U.K. Foreign Secretary Dominic Raab. “The challenge for us is to demonstrate in very concrete ways that we can deliver for our citizens.”

Raab echoed that view, saying there’s an increasing need for “agile clusters of like-minded countries that share the same values.”

The remarks are an outgrowth of a shared goal for an alliance of democratic nations to present a united front against the abuses that they argue are regularly committed by Russia and China, such as the crackdown on ethnic Muslims in China’s Xinjiang region and Russia’s poisoning of opposition leader Alexey Navalny.

That alliance is expected to be a key theme of meetings between the U.S., the U.K. and other members of the Group of Seven, whose representatives will gather alongside counterparts from Japan, India and others in London on Tuesday.

Some nations have expressed concern that they’re being asked to pick a side between the U.S. and China, the world’s two largest economies, but Blinken contends it’s mostly an effort to call out China’s refusal to play by global rules. He noted that it’s the 80th anniversary of the Atlantic Charter, which he said “set the foundation for the international rules-based order that our countries so strongly subscribed to.”

While Blinken had already met and spoken with Raab several times as secretary of state, the meeting Monday gave him the chance to reaffirm the traditional U.S.-U.K. “special relationship.” Blinken said the U.S. had “no closer ally, no closer partner” than Britain.

Prime Minister Boris Johnson is likely to welcome Blinken’s warm endorsement of the two nations’ ties when they meet on Tuesday. Soon after Joe Biden beat Donald Trump for the U.S. presidency in November, concerns arose that the new administration might keep its distance from Johnson in a contrast with Trump, who enthusiastically embraced the British leader’s championing of the U.K.’s exit from the European Union.

Biden has made a point of pressing Johnson to maintain the hard-won peace in Northern Ireland, however Brexit plays out.