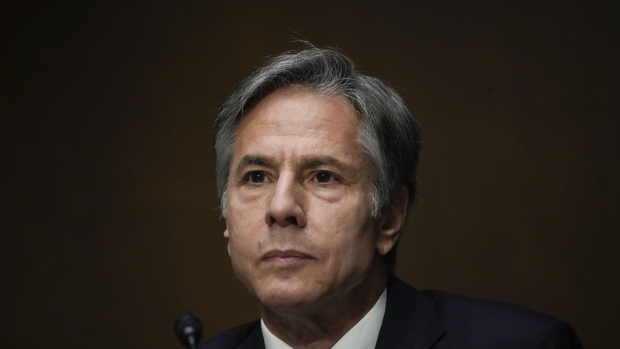 “There are many countries both in the region and beyond that would see any unilateral action to use force to disrupt the status quo as a significant threat to peace and security,” Blinken said at the New York Times Dealbook conference Wednesday. “And they too, would take action in the event that happened.”

Blinken was responding to a question about the extent of the U.S. commitment to Taiwan, which is self-governed but is claimed by China as part of its territory. President Joe Biden has sown confusion over the issue in recent weeks by saying the U.S. was prepared to defend Taiwan in the event of an attack -- comments that appeared to go beyond previous U.S. commitments to make sure Taiwan can defend itself.

The question has gained urgency amid rising U.S.-China tensions. China has ramped up military flights near Taiwan, flying more than 200 planes into the island’s air-defense-identification zone in October, and some analysts have warned that President Xi Jinping may be preparing for an invasion in coming years.

White House officials have said Biden’s remarks don’t reflect a change in policy, and interviewers have repeatedly pressed Blinken to clear up the discrepancy between Biden’s seemingly more aggressive posture and past U.S. statements. Each time, Blinken has been careful to hew closely to the official line, and he did so again Wednesday.

“We stand strongly against anyone taking unilateral action to disrupt the status quo by force, and we have commitments, long-standing commitments under the Taiwan Relations Act to make sure that Taiwan has the ability to defend itself,” Blinken said. “Our role is to make sure that it has the means to defend itself because if it does, that is the best deterrent against any very, very, very unfortunate action that that might be contemplated.”