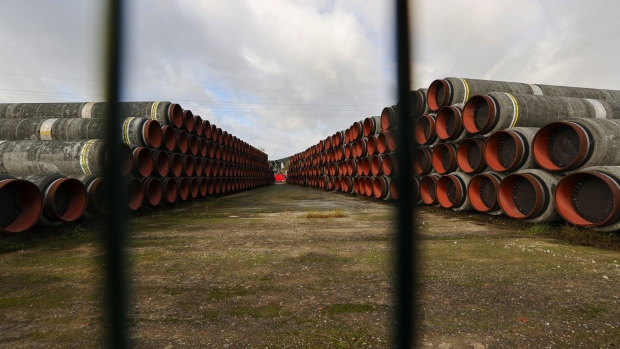 Sections of Nord Stream 2 pipes at the Baltic port of Mukran on the island of Ruegen in Sassnitz, Germany. Photograph: Alex Kraus/Bloomberg , Bloomberg

(Bloomberg) -- Secretary of State Antony Blinken called completion of the Nord Stream 2 pipeline from Russia to Germany a “fait accompli” and said the U.S. is now working with Germany to mitigate the damage it will cause to Europe’s energy system.

“The physical completion of the pipeline was, I think, a fait accompli,” Blinken told the House Foreign Affairs Committee on Monday. “I think we have an opportunity to make something positive out of a bad hand that we inherited when we came into office.”

Blinken said that sanctioning the chief executive officer of the project’s parent company, as opponents of the pipeline urged, would have led to a deterioration in U.S.-German relations. Now, he said, Germany has “come to the table” to try to prevent Russian President Vladimir Putin from using the pipeline to threaten Europe’s energy security.

Representative Michael McCaul of Texas, the committee’s top Republican, said in a tweet as Blinken testified that “it’s unacceptable that our strategic partner #Ukraine found out about the shameful decision to waive critical #NordStream2 sanctions through the press & not the Biden Admin directly.”

He said President Joe Biden should use “the mandatory authorities Congress provided to stop the pipeline” and that Biden should meet with Ukraine’s President Volodymyr Zelenskiy before his coming summit with Putin because allowing the pipeline to become operational “will render Ukraine more vulnerable to Russian aggression.”