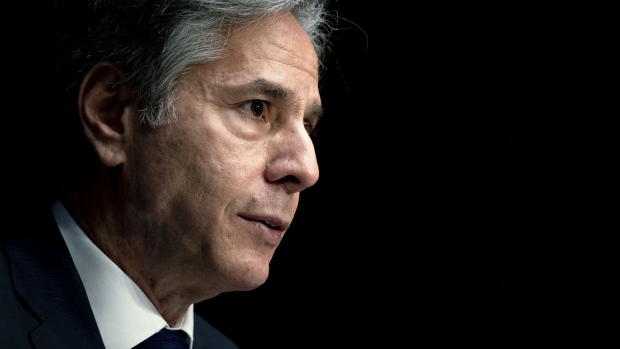 Filter separators, center, at the Gazprom PJSC Slavyanskaya compressor station, the starting point of the Nord Stream 2 gas pipeline, in Ust-Luga, Russia, on Thursday, Jan. 28, 2021. Nord Stream 2 is a 1,230-kilometer (764-mile) gas pipeline that will double the capacity of the existing undersea route from Russian fields to Europe -- the original Nord Stream -- which opened in 2011. Photographer: Andrey Rudakov/Bloomberg , Bloomberg

“It’s very unlikely or hard to see that happening if Russia has renewed its aggression on Ukraine,” Blinken said in an interview with NBC’s “Meet the Press” on Sunday.

The U.S. is pushing the government in Berlin to stop Nord Stream 2, which is awaiting certification by Germany, in the event Russia invades Ukraine, people familiar with the matter said last week. Blinken, German Foreign Minister Annalena Baerbock and their five Group of Seven colleagues on Sunday backed a joint statement warning Russia to back off Ukraine or “face massive consequences.”

“And in fact, it’s a source of leverage on Russia because to the extent President Putin wants to see gas flowing through that pipeline,” Blinken said.

Asked whether Germany would stop the gas link, Scholz said Wednesday that an attack on Ukraine would be a “very dramatic violation of the rules which would have very different consequences.”