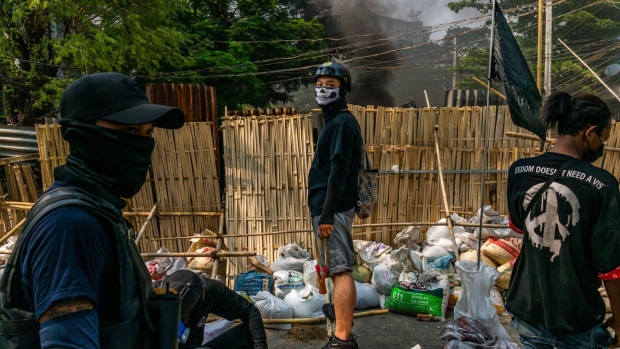 YANGON, MYANMAR - MARCH 27: Protesters stand behind a barricade while waiting for security forces to approach on March 27, 2021 in Yangon, Myanmar. Myanmar's military Junta continued a brutal crackdown on a nationwide civil disobedience movement in which thousands of people have turned out in continued defiance of live ammunition. Local news sources and witnesses said over 90 protesters were killed on Saturday, the deadliest day of clashes since protests against the coup began. (Photo by Stringer/Getty Images) , Photographer: Getty Images/Getty Images AsiaPac

“It’s important in weeks and months ahead to look at what steps we can take to pressure the regime, to put the country back on a democratic trajectory,” Blinken said in a joint press appearance with Malaysian Foreign Minister Saifuddin Abdullah.

The junta ousted civilian leader Aung San Suu Kyi in a coup in February, sparking clashes between her supporters and the army. She was found guilty last week by a court for inciting dissent against the military and sentenced to two years in prison.

Blinken also said that the U.S. is “actively looking” at whether the Myanmar government’s actions toward the country’s Muslim Rohingya minority should be labeled “genocide.” A 2018 United Nations report said Myanmar’s top generals should be investigated and prosecuted for committing genocide and war crimes against the minority population.

Saifuddin said that the Association of Southeast Asian Nations needed to enter a period of “soul-searching” over events in Myanmar.

“We cannot go on like this. We have to make sure that there are certain ways of doing things,” Saifuddin said. He added that while Asean upholds the principle of “non-interference, “Asean should also look at the principle of non-indifference because what happens in Myanmar is already getting out of Myanmar.”

Asean has struggled to get Myanmar’s military government to stick to a five-point consensus agreed earlier this year that includes stopping conflict with civilians. The U.S. has led its allies to sanction the country’s military.

The U.S has also imposed an arms embargo on Cambodia, which remains close to China and has stepped up engagement with Myanmar junta upon becoming the Asean chair. Cambodian Prime Minister Hun Sen has said the regime has the right to attend Asean meetings, a reversal in stance from the previous chair Brunei who led a rare step in October to deny Myanmar junta chief Min Aung Hlaing a seat at a summit.

Hun Sen has also accepted an invitation to visit Myanmar next month, the first government leader to do so since the junta took control in February.