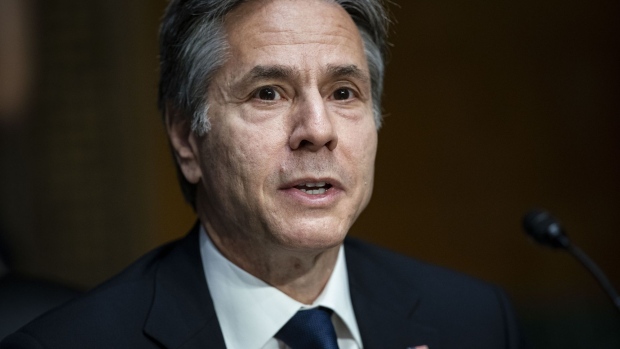 (Bloomberg) -- Secretary of State Antony Blinken’s visit to India next week will focus on the fight against the Covid-19 pandemic as the South Asian nation reels from the impact of the delta variant, State Department officials said.

Blinken will meet with Indian Prime Minister Narendra Modi and Foreign Minister Subrahmanyam Jaishankar during his trip, Dean Thompson, acting assistant secretary of state for South and Central Asian Affairs, told reporters Friday. The meetings also will focus on India’s role in Afghanistan as U.S. troops continue to withdraw from the country, as well as collaboration on defense, cybersecurity, climate and counterterrorism, Thompson said.

Ties between the U.S. and India have warmed in recent years as the two nations share converging interests over an increasingly assertive China. During talks in February, Blinken called on the leaders of India, Japan and Australia -- the so-called Quad grouping -- to strengthen “democratic resilience” in the Indo-Pacific region in the face of Chinese pressure.

Thompson said Blinken would raise human rights issues with Modi, an area where he said the two countries had more areas of agreement than disagreement. Asked about reports that the Indian government monitored the phones of Indian journalists and opposition leaders, Thompson said the use of surveillance technology against civil society or regime critics is “always concerning” but declined to comment further on the Indian case.

Blinken stressed the importance of cooperation over the pandemic in an interview on MSNBC’s “Morning Joe” program on Friday.

Why Chinese and Indian Troops Clash in the Himalayas: QuickTake

“This is such a critical country in the fight against Covid-19,” Blinken said. “The Indians stood up for us in the early days when we were having great challenges, helping to provide PPE, for example. We’ve now stood up for them as they have encountered wave after wave of Covid-19, including providing more than a quarter of a billion dollars of assistance to them.”

Blinken will also travel to Kuwait, where the two sides will discuss regional issues including Iran and the ongoing conflict in Yemen, according to Daniel Benaim, the deputy assistant secretary of state for Arabian Peninsula Affairs.

The secretary of state’s travels comes amid a flurry of visits to the Indo-Pacific region by Biden administration officials. Deputy Secretary of State Wendy Sherman has met with counterparts in South Korea and will be traveling to China and Russia in the coming days. Defense Secretary Lloyd Austin is also preparing to visit Singapore, Vietnam and the Philippines next week.