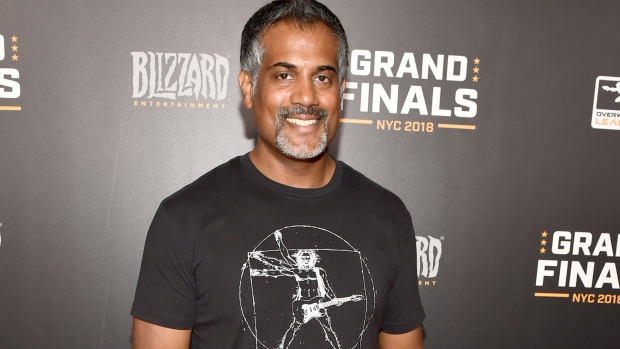 (Bloomberg) -- Blizzard Entertainment Inc. is losing the executive in charge of one of the video game developer’s biggest upcoming titles, marking another departure of senior staff while the company is grappling with a California lawsuit for sexual harassment and discrimination and an investigation by the Securities and Exchange Commission.

Chacko Sonny, executive producer of Overwatch, told staff he will leave the company on Friday, according to people familiar with the situation. A spokesman for parent company Activision Blizzard Inc. confirmed his departure.

In an email to staff reviewed by Bloomberg, new Blizzard co-leaders Jen Oneal and Mike Ybarra called him “a thoughtful leader” and said they were grateful for his service. Sonny didn’t say why he was leaving but wrote in a note to colleagues that working at Blizzard “has been an absolute privilege and one of the best experiences of my career.” His email didn’t refer to the turmoil related to the lawsuit or the SEC probe.

It’s yet another high-level exit from the studio since explosive allegations about workplace culture were revealed in July. The company’s top lawyer, Claire Hart, left last week and Chief People Officer Claudine Naughton is leaving this month. Blizzard president J. Allen Brack was pushed out over the summer, as were several developers including the director of upcoming game Diablo IV.

Sonny headed the Overwatch franchise and the development of Overwatch 2, expected to be one of Blizzard’s hottest titles this Fall. The first Overwatch, released in 2016, attracted more than 30 million players in its first year and surpassed $1 billion in revenue from in-game transactions two years later, according to the analytics firm Superdata.

In recent years, Blizzard has put the bulk of its resources into Overwatch 2 and Diablo IV, both of which have now been disrupted by multiple high-level departures. The Blizzard spokesman said Overwatch 2 “is in the final stages of production” and that the company will share more information at the finals of Blizzard’s esports event later this month.

Several Blizzard employees, speaking anonymously because they were not authorized to talk with the press, said Sonny was well-respected and that they weren’t aware of any allegations against him. Sonny was perceived as a stabilizing force on the Overwatch team following the departure of director Jeff Kaplan earlier this year, the people said.

Blizzard said it hasn’t yet decided who it will tap to helm the Overwatch franchise.