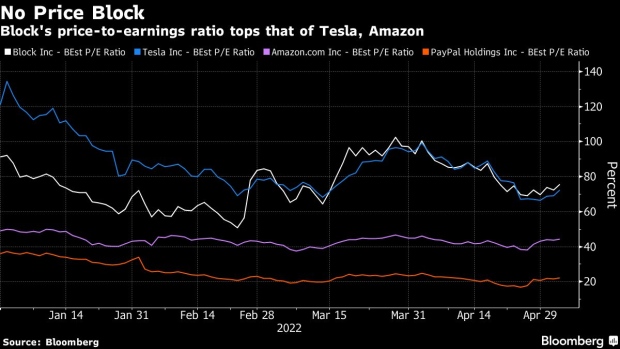 Analysts see more than 60% upside for the payments company, while shares in its bigger rival, PayPal Holdings Inc., have a return potential of 31%, according to Bloomberg data. At the same time, Block shares are by no means cheap, trading at 76 times estimated earnings and dwarfing PayPal’s valuation at 22 times.

The high price tag means that the company, formerly called Square, needs to deliver when it reports first-quarter results after the close today. Analysts at Jefferies said more clarity is needed around future growth for Block’s consumer payments service, Cash App, and around the impact of its $29 billion acquisition of Afterpay.

The set-up into results is “tricky,” with consensus estimates for Cash App “looking stretched” beyond the first quarter, and the profit drag from the Afterpay deal not fully reflected in expectations, analyst Trevor Williams wrote in a note. Still, Williams said that despite these near-term bumps, he’s bullish on the long-term opportunity. He has a buy rating on the stock.

So far, investors seem willing to pay out for Block’s growth potential. The company led by former Twitter Inc. Chief Executive Officer Jack Dorsey has expanded meaningfully from a simple point-of-sale firm into digital payments and crytocurrencies with Cash App, and into the buy-now, pay-later space with the Afterpay deal, which closed in January.

That diversification also means that some investors prefer Block over PayPal, which is still highly reliant on e-commerce transactions.

Block has “executed admirably” over the past 6-9 months compared with PayPal, which experienced “several operational missteps” that hurt revenue growth, according to SMBC Nikko Securities America analyst Andrew Bauch, who has a buy-equivalent rating on Block. The stock has 42 buy ratings, 8 holds and 2 sell recommendations, according to data compiled by Bloomberg.

Bauch added that Block isn’t pricey when looking at its long-term prospects. “When compared to other fintech names with similar levels of gross profit growth, the stock appears much more affordable,” he said.

Still, the fintech favorite hasn’t been immune to recent market turmoil, falling about 34% this year. And, even if it jumps 60% to hit analyst targets, that level is still lower than last year’s record high.

Tech stocks rebounded on Wednesday after Federal Reserve Chairman Jerome Powell said the central bank was not actively considering a 75-basis-point rate hike following its biggest increase in rates in more than two decades. The benchmark S&P 500 Index jumped 3%, its best performance since May 2020, pushing its rebound into a third straight day.