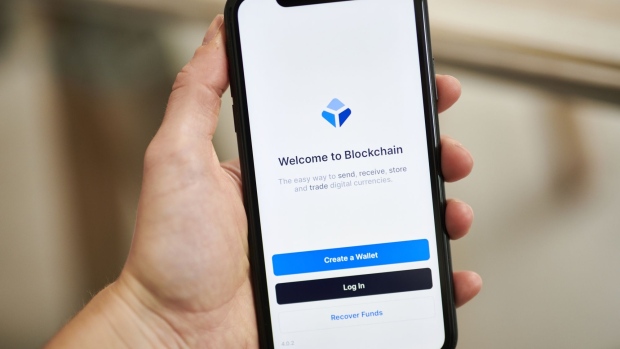 The Blockchain.com application on a smartphone arranged in Little Falls, New Jersey, U.S., on Saturday, May 22, 2021. Elon Musk continued to toy with the price of Bitcoin Monday, taking to Twitter to indicate support for what he says is an effort by miners to make their operations greener. Photographer: Gabby Jones/Bloomberg , Bloomberg

(Bloomberg) -- Blockchain.com, a creditor of Three Arrows Capital, said it is cooperating with ongoing investigations into the troubled crypto hedge fund.

Blockchain.com and Deribit, a crypto derivatives exchange, confirmed that they are among creditors that sought for the liquidation of Three Arrows at a court in the British Virgin Islands, according to a court filing and representatives at the two companies. The court made the liquidation order on Monday and has appointed two partners at consulting and advisory firm Teneo to handle the process, a person familiar with the matter has told Bloomberg News.

“We believe Three Arrows Capital defrauded the crypto industry and intend to hold them accountable to the fullest extent of the law,” a spokesperson at Blockchain.com said in an emailed statement. “We have filed for the immediate liquidation of all global assets of Three Arrows.”

Three Arrows was reprimanded Thursday by the Monetary Authority of Singapore for providing false information and exceeding the maximum amount of money it was allowed to manage. The central bank said it has been investigating these actions since June 2021 in a statement.

The liquidation order brings down the curtain on one of crypto’s most famous hedge funds, founded in 2012 by Su Zhu and Kyle Davies, former Credit Suisse Group AG traders. Three Arrows’ assets under management were estimated to be about $10 billion in March, according to blockchain analytics firm Nansen. Davies told the Wall Street Journal earlier this month that it had roughly $3 billion in assets under management in April before crypto markets crashed.

Nichol Yeo, a partner at law firm Solitaire LLP, told the Wall Street Journal that Three Arrows is considering options as it seeks legal advice in the British Virgin Islands. Yeo didn’t respond to a request for comment from Bloomberg News.

Blockchain.com, a London-based crypto wallet provider and exchange valued at $14 billion in March, said it remains liquid and solvent with a strong financial position, and customers won’t be affected.

Deribit, whose parent company counts Three Arrows as a shareholder, has said on Twitter it remains financially healthy despite having a net debt that it considered potentially distressed. Three Arrows’ woes have hit firms such as crypto broker Voyager Digital Ltd., which has issued a notice of default to the fund.