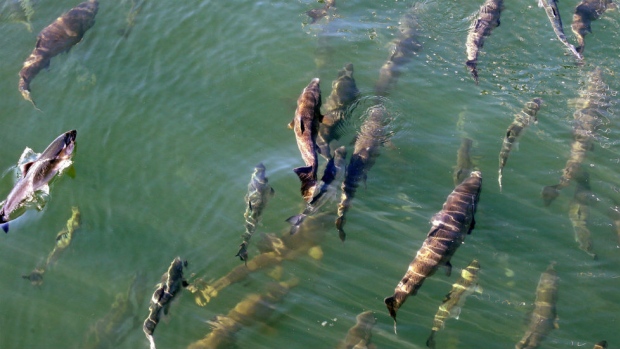 In this Sept. 14, 2017, file photo, salmon circle just below the surface inside a lock where they joined boats heading from salt water Shilshole Bay into fresh water Salmon Bay at the Ballard Locks in Seattle. , Elaine Thompson/AP Photo

Consumers around the world will soon be able to know intricate life details of the salmon they eat with a new blockchain initiative from top exporter Norway.

The Norwegian Seafood Association has partnered with International Business Machines Corp. and technology provider Atea ASA to gather data on how salmon is bred, stored and shipped, information that consumers will eventually access by scanning a QR code.

That will help Norway’s suppliers differentiate their premium products from other exporters, curb origin fraud and cut waste.

“Blockchain lets us share the fish’s journey from the ocean to the dinner table,” said Alf-Goran Knutsen, chief executive officer of Kvaroy Arctic, a supplier that’s part of the initiative. “This is now more timely than ever.”

As consumers increasingly want to know what’s in their food and how it’s produced, blockchain has helped retailers ensure products from chicken to pasta aren’t tainted or passed off as something else.

But fish has been harder to trace, making it particularly vulnerable to fraud. Advocacy group Oceana has estimated that one in five seafood samples are mislabeled.

While Norway has stricter rules than many producers on how it treats salmon, fish farming globally has been mired in controversies from the use of antibiotics to the sustainability of fish feed.

Using blockchain to monitor a fish’s life story will help Norway’s producers safeguard their reputation and stop inferior products being faked as Norwegian, according to Espen Braathe, an executive at IBM Food Trust Europe.

“When you sell a fresh, clean product, it’s really important you produce as much evidence as possible,” Braathe said in an interview.

The project, the first to cover the entire salmon supply chain, will go live by the end of September and will also monitor trout. Sensors and cameras will record details such as water temperature and what the fish are fed, Atea CEO Steinar Sonsteby said.

The initiative, which will later expand to wild catches, should allow Norwegian farmers to obtain higher prices for their fish, said Robert Eriksson, CEO of the Norwegian Seafood Association. The target is for each member to trace as much as 40 per cent of their fish population by 2025, according to IBM.

Concerns over the link between food and recent coronavirus cases in China shows how blockchain could ease such worries, Sonsteby said.

The new outbreak had been blamed on imported salmon, and fears over whether food can transmit viruses had led salmon to be boycotted in China, even though experts said there’s no evidence the fish was the origin or intermediate host.

“It really exemplifies very well how a solution like this could work to introduce trust into the value chain and the industry,” Sonsteby said. For retailers in general, “they want to be 100 per cent sure that what they are buying and selling on is something that they can be 100 per cent behind.”