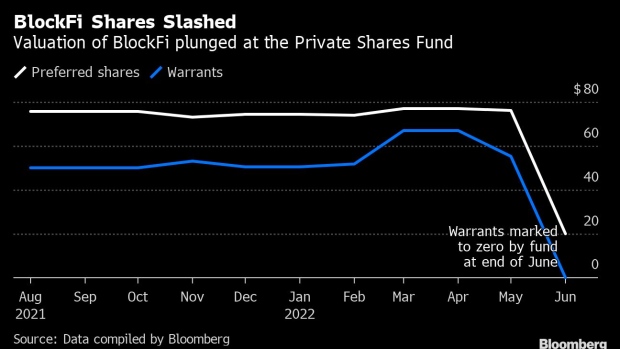 The BlockFi website on a laptop computer arranged in Little Falls, New Jersey, U.S., on Saturday, May 22, 2021. Elon Musk continued to toy with the price of Bitcoin Monday, taking to Twitter to indicate support for what he says is an effort by miners to make their operations greener. Photographer: Gabby Jones/Bloomberg , Bloomberg

(Bloomberg) -- Investors in BlockFi Inc., the hobbled crypto lender that received a capital injection from digital-asset exchange FTX US, are prepared for some of their holdings to be wiped out.

The Private Shares Fund, a fund overseen by Liberty Street Advisors, marked down BlockFi’s warrants as worthless in its fund report at the end of June, according to an analysis of data compiled by Bloomberg. On June 30, FTX offered a lifeline in the form of a $400 million revolving credit facility with an option to buy the company in a bid to save BlockFi after it was hit by recent liquidations.

The Private Shares Fund, which specializes in investing in late-stage private companies, gave BlockFi series E warrants a valuation of as much as $67 per unit as recently as April. It also cut its valuation of BlockFi’s preferred shares to about $20 per share, down from $77 at the end of April.

All investment rounds in BlockFi are pari-passu, meaning that investors are on equal footing, according to people familiar with the matter who declined to be identified discussing confidential matters. Proceeds from the deal with FTX US will be also be pari-passu.

The Private Shares Fund didn’t respond to Bloomberg’s request for comment. BlockFi directed Bloomberg to Chief Executive Officer Zac Prince’s Twitter feed where he announced on July 1 that the company had reached a deal with FTX US.

The transaction represents a total value of as much as $680 million, a drastic shrinkage from BlockFi’s $3 billion valuation as of March 2021. BlockFi also previously looked to raise funding at a reduced valuation of $1 billion in the weeks leading up to its financial troubles.