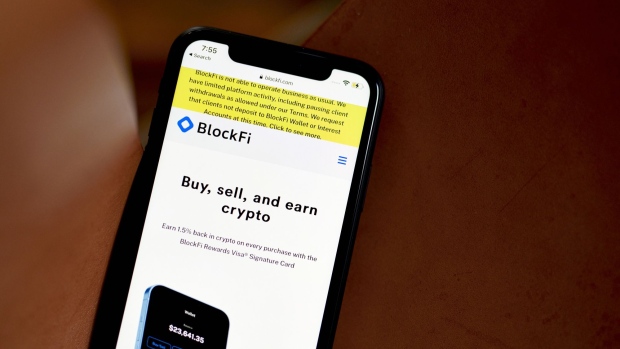 The BlockFi website on a smartphone arranged in the Brooklyn borough of New York, US, on Thursday, Nov. 17, 2022. Cryptocurrency lender BlockFi Inc. is preparing to file for bankruptcy within days, according to people with knowledge of the matter who asked not to be named because discussions are private. Photographer: Gabby Jones/Bloomberg , Bloomberg

The company made its first appearance in bankruptcy court in Trenton, New Jersey, on Tuesday, seeking routine approval to keep operating while it tries to develop a plan to repay creditors owed more $1 billion by reorganizing or finding a buyer.

Part of that effort will include collecting money it is owed by other crypto firms, including Alameda Research, the bankrupt trading operation founded by Bankman-Fried. Alameda defaulted on certain collateralized loans from BlockFi, a lawyer for the lender said at the hearing.

BlockFi also owes FTX about $275 million, which was part of a lending package designed to help BlockFi survive the drop in crypto prices that pushed multiple companies into bankruptcy.

BlockFi filed bankruptcy on Monday, blaming the collapse of Bankman-Fried’s empire, which itself sought court protection in Wilmington, Delaware earlier this month. As part of its bankruptcy, BlockFi filed a lawsuit against Emergent Fidelity Technologies seeking to recover assets it claims are collateral for defaulted debt.

A lawyer for FTX told Kaplan that those assets may actually belong to FTX. A courtroom showdown on the assets is likely to come before the judge in January, a lawyer for BlockFi said during Tuesday’s hearing.

Sussberg told Kaplan that BlockFi is in a stronger position than FTX because it was better run and never issued its own digital currency. BlockFi is licensed in 32 states and is working with US regulators to relaunch programs that had been suspended after an investigation by the US Securities and Exchange Commission.

Kaplan gave BlockFi permission to keep paying employees and other necessary expenses while in bankruptcy. The judge also agreed to let the company keep secret many of its top creditors, which BlockFi argues are clients whose names shouldn’t be released. Kaplan will give the US Trustee, an arm of the Justice Department which monitors corporate bankruptcy cases, the chance to argue in favor of making the names public at a future hearing.

(Updates with dispute over collateral in sixth paragraph.)