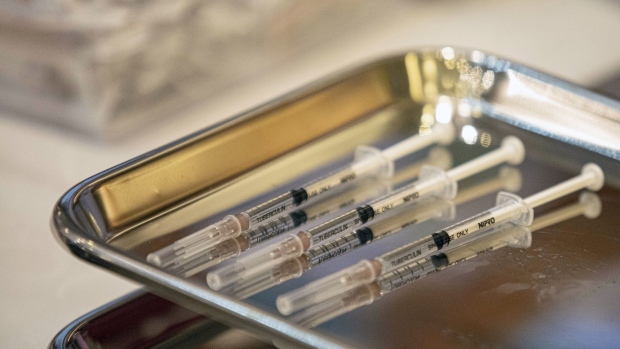 Syringes containing doses of the AstraZeneca Covid-19 vaccine on a tray at the Bamrasnaradura Infectious Diseases Institute in Nonthaburi, Thailand, on Friday, March 12, 2021. Thailand’s Health Ministry said that the nation would temporarily halt the use of AstraZeneca Plc vaccines until there’s more clarity from the investigations of possible blood clots. The Prime Minister Prayuth Chan-Ocha and some of his cabinet members who were scheduled to get their AstraZeneca shots today have postponed their appointments after suspensions of the vaccine in some European countries, including in Denmark, Italy and Norway. Photographer: Andre Malerba/Bloomberg , Bloomberg

(Bloomberg) -- Covid-19 patients face a much higher risk of developing blood clots than those vaccinated with AstraZeneca Plc or Pfizer Inc.’s shots, according to a large U.K. study.

For every 10 million people who receive the first dose of AstraZeneca, about 66 more will suffer from a blood-clotting syndrome than during normal circumstances, according to the study published in the British Medical Journal. This figure compares with 12,614 more incidences recorded in 10 million people who have tested positive for Covid-19.

The study followed 29 million people who received their first doses of either AstraZeneca or Pfizer vaccine between December, 2020 and April and also tracked about 1.7 million Covid-19 patients.

The findings appear to bolster the decision to continue using AstraZeneca’s vaccine, which has been dogged by safety concerns, to protect people from hospitalization and death. Many developed countries have, however, limited its use to older adults because of concerns about an elevated risk of blood clots affecting the younger population.

Although the study noted the increased likelihood of the disorder, it also “underscores the importance of getting vaccinated to reduce the risk of these clotting and bleeding outcomes in individuals,” said Aziz Sheikh, a co-author of the study and professor at the University of Edinburgh.

The researchers observed that people who contracted the virus were nearly nine times more likely to have low levels of platelets compared with people vaccinated with the first dose. A review of stroke risks in the study found there was a higher chance of the virus contributing to a stroke than after the first dose of the shot developed by Pfizer with partner BioNTech SE.

The study did not establish whether the identified cases of blood clots were definitively caused by the vaccines, though regulators have identified a possible link. Although the study was run by the University of Oxford, the authors said it was independent from the Oxford scientists who worked on the Astra vaccine.

Data published in July showed AstraZeneca’s vaccine doesn’t raise the risk of the disorder after a second dose. The estimated rate was 2.3 per million in people who received a second shot, comparable to what’s found in an unvaccinated population, but the rate after a single dose was higher, at 8.1 per million.