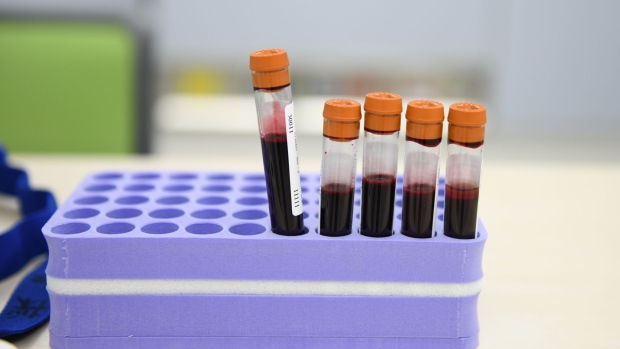 Blood samples on a table during a Covid-19 antibody test at Chiba University Hospital in Chiba, Japan, on Wednesday, Dec. 1, 2021. While daily coronavirus cases have remained low in Japan, concerns about another wave of infections grew further as the country recorded its second case of omicron variant on Wednesday. , Bloomberg

(Bloomberg) -- A simple blood test that can detect Alzheimer’s disease years before symptoms appear may be one step closer to reality, as researchers devise a new method to find it early.

The latest test focuses on amyloid beta proteins that have misfolded and are starting to clump together in the brain, a hallmark of Alzheimer’s disease. At one time, they could only be found during an autopsy. Now they are often uncovered with advanced imaging tests.

Finding patients earlier in the course of their disease will give them time to prepare and make changes that could help them later, said senior author Valerie Daggett, a professor of bioengineering at the University of Washington. A spate of positive news from companies including Eisai Co. and rival Eli Lilly & Co. has renewed hope that effective treatments may be be found to slow the mental decline.

“For early treatment, we first need early diagnosis,” she said in an interview. “Also, with an early diagnosis there are lifestyle modifications that can prove helpful and buy time for other therapeutics to come on the market,” she said.

The new approach involves measuring levels of what’s known as toxic oligomers, a buildup of those misfolded proteins that over time are believed to contribute to Alzheimer’s disease. The study involving blood donated years earlier by 310 people. Out of 53 people verified after death to have had Alzheimer’s disease, 52 had signs of the toxic oligomers on average six years earlier.

More significantly, they were also present in 11 people who seemingly had no memory problems or signs of dementia when they gave the blood.

Follow up records were available for 10 of those volunteers, and all were subsequently diagnosed with symptoms consistent with Alzheimer’s disease, according to the report published in the Proceedings of the National Academy of Sciences. Of the 220 people without the toxic oligomers in their blood, two were subsequently found to have signs of the disease.

The tests currently in commercial use are limited to diagnosing people who already have symptoms. For example, Fujirebio Diagnostics Inc.’s Lumipulse G ß-Amyloid Ratio test -- which was approved by the US Food and Drug Administration in May -- is a lab-based test intended for adults aged 55 years and older with cognitive decline.

Scientists previously have touted blood tests for predicting the disease, with Japan’s Shimadzu Corp. and Roche Holding AG among firms that have looked into the method in the past. Most remain in the trial stage.

C2N Diagnostics LLC, which has a commercially available blood test to detect amyloid, announced last week it will launch another version in the first quarter of next year that will look for both amyloid and the tau protein that has also been linked to the disease.

AltPep Corp., a spin-out from Daggett’s lab in the University of Washington’s bioengineering department, is developing the diagnostic that has received breakthrough status from the FDA. It’s also working on a drug to neutralize oligomers.

The researchers say the test doesn’t require sophisticated equipment and doesn’t need to take into account things like age and other risk factors. That would potentially make it easy to use in standard labs and clinics, Daggett said, though it’s hard to know when it might be available.

“We don’t know the cost yet, but our goal is an affordable test that can be deployed on a global scale,” she said.

--With assistance from Kanoko Matsuyama.

(Adds the number of false negatives in the seventh paragraph, details on the company working on the test in the third to last paragraph)