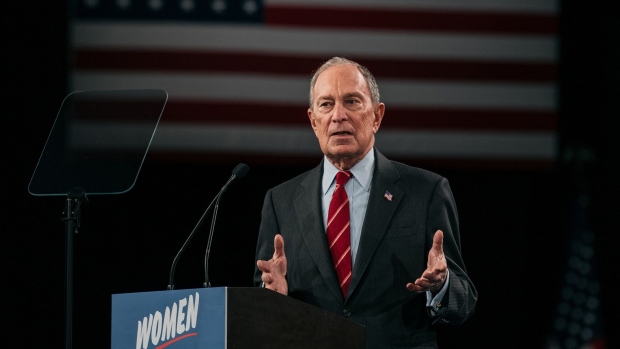 (Bloomberg) -- Michael Bloomberg is meeting with groups of Democrats in Congress on Capitol Hill on Thursday seeking support for his fledgling 2020 presidential campaign.The former New York mayor plans to meet separately with BOLD PAC, the political arm of the Congressional Hispanic Caucus; ASPIRE PAC, the political arm of Asian American and Pacific Islander members of Congress; the New Democrat Coalition of centrist Democrats and the co-chairmen of the Blue Dog Coalition of “fiscally responsible” Democrats.

The New Democrat group sent a letter to every Democratic presidential candidate to meet with them.Bloomberg is self-funding his campaign, so the purpose of the meetings is relationship building and to get to know individual members, according to a person familiar with one of the groups.Bloomberg is the founder and majority owner of Bloomberg LP, the parent company of Bloomberg News.

The Democratic presidential candidates will debate again in New Hampshire on Feb. 7.

The first-in-the-nation Iowa caucuses will be held Feb. 3. The New Hampshire primary is Feb. 11. Nevada holds its caucuses on Feb. 22 and South Carolina has a primary on Feb. 29.

(Michael Bloomberg is also seeking the Democratic presidential nomination. He is the founder and majority owner of Bloomberg LP, the parent company of Bloomberg News.)

--With assistance from Billy House and Erik Wasson.

To contact the reporter on this story: Mark Niquette in Columbus at mniquette@bloomberg.net

To contact the editors responsible for this story: Wendy Benjaminson at wbenjaminson@bloomberg.net, Craig Gordon