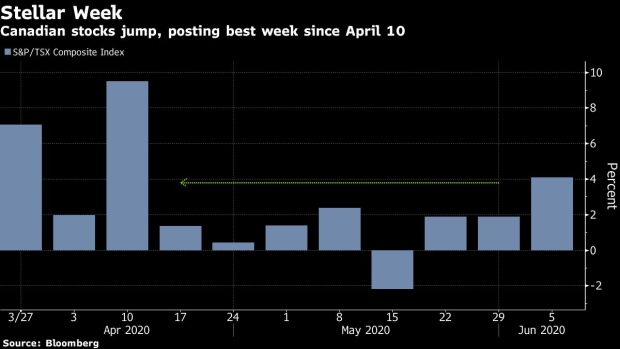 A pedestrian walks on the sidewalk in the financial district of Toronto, Ontario, Canada, on Friday, May 22, 2020. Whether the PATH, a subterranean network that provides connections between major commuter stations, over 80 properties, including the headquarters of Canada's five largest banks, and 1,200 retail spots, can return to its glory days will depend initially on how quickly Bay St. firms return workers to their offices. Photographer: Bloomberg/Bloomberg , Photographer: Bloomberg/Bloomberg

(Bloomberg) -- Canadian stocks posted their best week in about two months, turbocharged by an unexpected rebound in the U.S. and domestic labor market from the depths of the coronavirus shutdowns.

The S&P/TSX Composite Index jumped 2.1% Friday, to close out the week 4.4% higher, its biggest gain since the week of April 10 as Canada added jobs 290,000 jobs in May, surprising economists who had been anticipating more losses last month. The report dovetailed with a U.S. labor report that showed the market defying forecasts for a Depression-style surge in unemployment.

The Canadian dollar joined in the party, gaining about 2.7%. The benchmark 10-year government bond tumbled, sending its yield to the highest since mid-April at 0.726% as the jobs data bolstered optimism for a quick economic recovery amid new bouts of fiscal stimulus.

“This whole fear of missing out has hit very dramatically,” David Prince, founder of Harbinger Capital Markets Inc. said on BNN Bloomberg. Investors have shifted away from “the stay-at-home play” into more cyclical or economically sensitive sectors and the trade has just gone “crazy,” he said.

“Energy stocks are beginning to reflect that the worst is over for the oil price and that optimism is growing on a swifter-than-consensus demand normalization as economies around the world emerge from their lockdown,” said Eric Nuttall, portfolio manager at Ninepoint Partners.

“Despite strong month-to-date gains, many oil stocks remain down 50% or more despite entering the year at already near their lowest valuations in history,” he added.

The TSX climbed above its 100 daily moving average earlier this week, signaling room for the benchmark to rally further. It’s edging closer to its 200 daily moving average, a feat unseen since the stock market rout in February. Canadian stocks are now about 7% from breaking even for the year, solidifying it’s bull market attained in April.

“My fear is that reality is going to settle in and we won’t be able to go back to business as usual as quickly. What I’m seeing in terms of the industries that are really being suppressed, it is hard to imagine that suddenly they could go from bankruptcy to full-blown expansion. It’s just really hard,“ Prince said.

Here’s what happened this week.

Canada added 289,600 jobs in May, blowing away economist projections for a 500,000 loss and indicating the economy is regaining some of its health after Covid-19. The unemployment rate ticked up to 13.7%, a postwar record as people returned to the labor force. That was also less than the 15% forecast.

In the last policy decision under Stephen Poloz, the Bank of Canada left its benchmark interest rate unchanged while upgrading its outlook for second quarter gross domestic product to a less severe contraction. New Governor Tiff Macklem participated as an observer during the deliberations and endorsed the decision.

Canada’s residential real estate market is bouncing back from coronavirus shutdowns with home sales and prices rising in Toronto and Vancouver in May from the near freeze-up of activity caused by the pandemic in early spring.

At the beginning of the week Prime Minister Justin Trudeau took a long pause when asked what he thought of U.S. President Donald Trump’s response to the protests against racial discrimination. By the end of the week he was taking a knee.