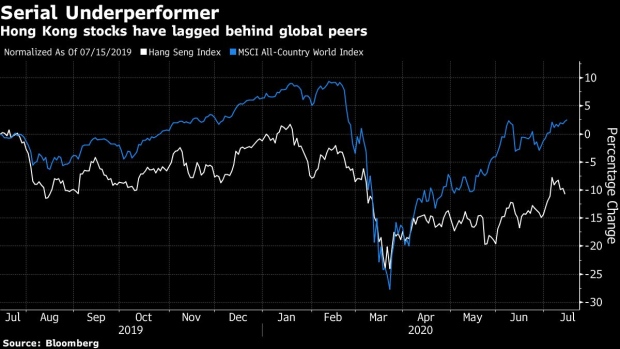 Offices in the Jardine House, left, and Exchange Square buildings are illuminated at dusk in the Central district in Hong Kong, China, on Monday, June 22, 2020. The U.S. Senate approved a bipartisan measure on June 25 that would penalize banks doing business with Chinese officials involved in the national security law the country is seeking to impose on Hong Kong. Photographer: Billy H.C. Kwok/Bloomberg , Bloomberg

(Bloomberg) -- A relentless run of bad news keeps grinding down Hong Kong’s stock bulls. Protests, a global pandemic, a collapsing economy, a crackdown on individual freedoms and now the end of the city’s special status with the U.S.

While the latest news was expected, it highlights Hong Kong’s growing vulnerability to heightened tensions between Beijing and Washington, and adds to the bear case for the city’s listed equities given the unknown impact of sanctions.

The Hang Seng Index is already a global laggard: the gauge is down 11% over the past 12 months, compared with a 2% gain by MSCI’s index of world stocks. Against U.S. and mainland Chinese benchmarks, Hong Kong’s underperformance is even more stark. The S&P 500 Index and CSI 300 Index have rallied at least 6% in the past year.

“U.S. sanctions have been an overhang for Hong Kong assets,” said Steven Leung, executive director at UOB Kay Hian. “Worries include how it will affect the city’s trade in the future and also there have been fears that banks in the city could be banned from buying the greenback. Investors will give a discount when considering buying assets here given all these worries.”

President Donald Trump approved the legislation on Tuesday after spending weeks blaming Beijing for the coronavirus pandemic and criticizing its handling of Hong Kong and treatment of minority groups in western China. Under the United States-Hong Kong Policy Act of 1992, the U.S. treats Hong Kong differently than the Chinese mainland in trade, commerce and other areas.

Trump said that the executive order he signed earlier in the day meant Hong Kong would now be treated the same as mainland China. The White House said the order would revoke special treatment for Hong Kong passport holders and ends Hong Kong’s benefits of U.S. exports.

“In the longer term, this adds another needless layer of uncertainty to already frosty Sino-US relationships, especially with regards to trade,” said Justin Tang, head of Asian research at United First Partners. “Against the backdrop of COVID-19 related disruptions, an escalation of trade wars will plunge supply chains into further disarray.”

To be sure, the Hang Seng Index had a flurry of gains around the imposition of the national security law at the start of this month, supported by mainland inflows. Those gains have faded in the past week, placing the gauge among the bottom 10 performers among 93 global benchmarks tracked by Bloomberg.

Adding to the gloom is a spike in local coronavirus cases, which this week prompted the government to impose some of the most drastic measures yet to contain the outbreak.

“Stocks are underperforming because the local economy is struggling,” UOB’s Leung said. “The virus situation worsened recently and many economic activities have been affected.”