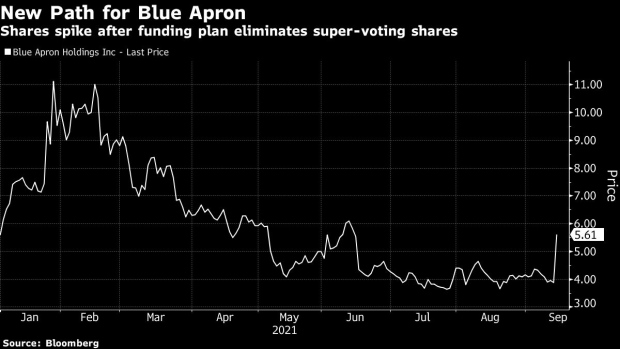 (Bloomberg) -- Blue Apron Holdings Inc. surged by the most since early in the pandemic on Wednesday after the subscription meal-kit maker disclosed plans to raise capital and eliminate shares with outsize voting power.

The shares closed up 45% after the company announced the plan, which includes $78 million in fundraising. The amount is equal to roughly 60% of Blue Apron’s current market value. Co-founders Matthew Salzberg and Barry Salzberg will also resign.

As part of the issuance plan, some holders agreed to convert their Class B shares -- which get ten votes each -- into Class A shares that get only one vote. This triggered a provision that converts for all outstanding Class B shares, the company said in a statement. Known as super-voting shares, Blue Apron’s Class B shares were part of a controversial trend that awarded extra votes to company founders.

Blue Apron’s fundraising plan includes a $45 million rights offering and a pair of private placements. It follows a 31% decline in the stock this year through Tuesday’s close.