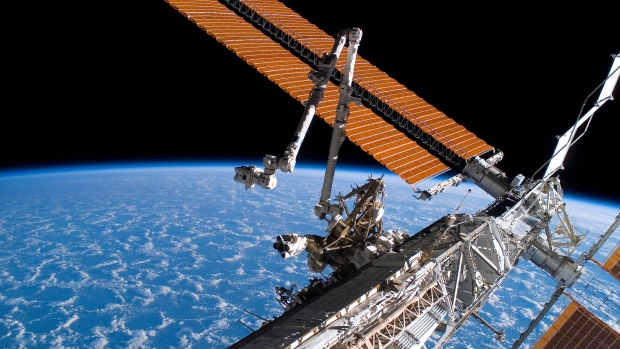 In this handout photo provided by NASA, the Canadarm2 (center) and solar array panel wings on the International Space Station are extended during the mission's first planned session of extravehicular activity (EVA) while Space Shuttle Endeavour (STS-118) was docked with the International Space Station August 11, 2007 in Space. During the 6-hour, 17-minute spacewalk Mastracchio and Williams attached the Starboard 5 (S5) segment of the station's truss, retracted the forward heat-rejecting radiator from the station's Port 6 (P6) truss, and performed several get-ahead tasks , (Photo by NASA via Getty Images)

Blue Origin and Sierra Space said Monday they plan to build a commercial space station in low-Earth orbit before the decade is over.

The project, which is called Orbital Reef and is designed to operate as a “mixed-use business park” in space, is backed by groups including Boeing Co., Redwire Space, Genesis Engineering Solutions, and Arizona State University. It will include infrastructure and services that will be shared by multiple tenants, such as module berths, vehicle ports, utilities and other amenities.

The station is expected to start operating in the second half of this decade.