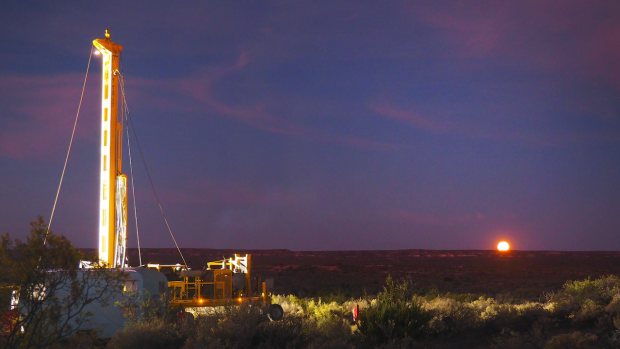 A shot of the Amarillo Grande Project in the Patagonia region of southern Argentina.

As the world searches for more climate friendly solutions for electricity generation, nuclear power is an increasing part of the discussion.

The world’s uranium-fueled nuclear reactors produce reliable baseload power but have a very small carbon footprint. Microsoft founder Bill Gates had this to say about the sector, “Nuclear is ideal for dealing with climate change, because it is the only carbon-free, scalable energy source that’s available 24 hours a day.”

“You can’t achieve the stated targets for climate change protocols without having a substantial nuclear power base providing reliability,” he says.

Cacos should know. As the company’s name implies, Blue Sky Uranium is an explorer for the metal used to power the world’s uranium plants. Blue Sky’s focus is on its Amarillo Grande uranium project in Argentina, which has a small, but growing nuclear power fleet and which could well be an end user for the project’s surface-mineable uranium deposit.

Uranium is on a tear

After languishing for many years, uranium prices have experienced a rebound of late. Uranium stocks have surged in 2021, driven by a big move into the spot uranium market by the newly created Sprott Physical Uranium Trust (“SPUT”).

Since mid-August, the investment vehicle has bought up more than 25 million pounds of uranium off the spot market. That has accelerated uranium’s upward price trend in 2021, from a low around US $28/lb. in February to US $43/lb. today.

With uranium on a tear, Amarillo Grande gives Blue Sky Uranium a project in a nuclear-power-friendly country that covers a 145 km uranium trend. The project’s Ivana deposit hosts 22.7 million pounds of uranium oxide and 11.5 million pounds of vanadium oxide. (Vanadium is a specialty metal used in alloys and glass coatings and as catalysts.)

A 2019 preliminary economic assessment gave the project an after-tax net present value, discounted at 8 per cent, of US $135.2 million and IRR of 29.3 per cent. Those solid economic numbers reflect Ivana’s potential as a low-cost operation. Cacos notes of the study, “We wanted to see if we could have an economic deposit under then-current market prices, which were between $20 and $30 a pound.”

Because Ivana is a near-surface deposit and its uranium is easily leachable, Blue Sky was able to keep costs much lower than the global average for uranium production. All-in sustaining costs for the project are forecast to be US $18.27/lb. U3O8, net of vanadium credits. If uranium continues to trade at current levels in the mid-US $40s, Ivana’s potential profitability would go up accordingly.

A ready-made buyer in Argentina

Selling uranium at those prices would certainly benefit Argentina, which started its first nuclear reactor in 1974 and currently imports all its uranium to produce nuclear fuel. The country has three operating reactors and another three under construction.

Argentina has all the other industrial capabilities needed to process that uranium, but because it is importing the energy metal, it is “paying around US $65 to US $70 per pound,” according to Cacos.

Ivana’s 22-million-pound inferred uranium resource would provide ample raw material for Argentina’s nuclear industry and do so at a compelling price point.

Growth through drilling, advancing toward development

In addition, the deposit at Ivana, Amarillo Grande, as a whole, has a vast upside in terms of exploration.

As Blue Sky advances Ivana toward a prefeasibility study, it is also conducting drilling to find satellite deposits within the company’s district-scale land position. So far this year, the company has completed around 1,600 m of a planned 4,500 m drill program on Amarillo Grande to test advanced-stage targets. It also recently began a second, 3,500 m program that will test regional targets.

That initial 1,600 m of work tested the Ivana North target, where Blue Sky’s VP of Exploration Guillermo Pensado sees “all the markers for another Ivana-type deposit.” The good news for Blue Sky is that the near-surface nature of the mineralization at Amarillo Grande means it can explore for new “Ivanas” quickly and easily.

The current plan is to keep drilling on the project over the next six months while it continues work on that prefeasibility study, which is due out sometime in 2022.

The amount of physical uranium SPUT has taken off the spot market could have a material impact on the long-term contract, where prices are typically negotiated. By limiting the availability of spot material, nuclear power buyers are going to have to start buying through long-term contracts again.

That will likely set prices at a level that can entice enough uranium production to come back online. Because Blue Sky’s Ivana deposit is already profitable at even the $20–$30/lb. level, higher long-term contract prices would provide a sizeable boost to project cash flows.

It’s a situation that sets Blue Sky Uranium up for success.

Watch Blue Sky’s Investor Update video to hear the company’s President and CEO, Nikolaos Cacos, discuss how his company is further defining its flagship Amarillo Grande Project as it advances to a pre-feasibility study.