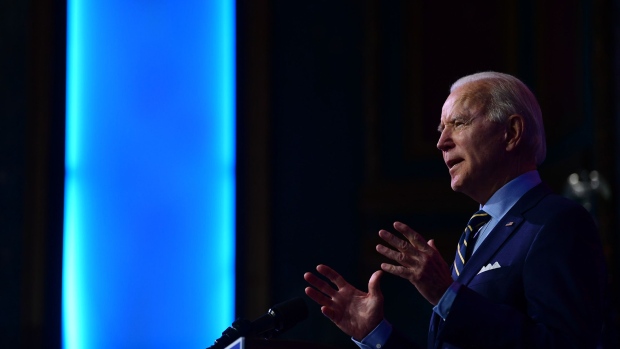 A Democratic sweep of both houses of the U.S. Congress stoked a record flood of cash into renewable-energy exchange-traded funds this week.

The US$6.2 billion iShares Global Clean Energy ETF (ticker ICLN) lured a record UA$691 million of inflows so far this week, according to data compiled by Bloomberg. Meanwhile, the US$4.6 billion Invesco Solar ETF (ticker TAN) is on track to take in nearly US$370 million this week -- another all-time haul.

The flood follows a strong Democratic showing in this week’s runoff elections in Georgia, which tipped control of the Senate to President-elect Joe Biden’s party. With Democrats at the helm of both the White House and Congress, that increases the odds that Biden’s energy policies will come to fruition -- boosting the appeal of “clean” funds, according to Independent Advisor Alliance’s Chris Zaccarelli.

“Clearly the Democrats recapturing the Senate in conjunction with their control of the House and White House brings a lot more investment outcomes to the fore,” said Zaccarelli, the firm’s chief investment officer. “Clean energy is more likely to see positive tail winds or at least no head winds under full Democratic control of government than under any other configuration.”

There are risks that those bets may be too optimistic, given how slim the Democratic hold on the Senate is, said Todd Rosenbluth, director of ETF research for CFRA Research. Additionally, it’s unclear how aggressively the Biden administration will pursue those policies as the U.S. struggles to contain the spread of the coronavirus and its economic impact.

“Right now, we’re looking at the legislative agenda as more focused on the near-term in terms of stimulus before you get to any further plans for infrastructure or anything like that,” said Rob Haworth, senior investment strategist at U.S. Bank Wealth Management. “It’s not quite clear the extent to which and how aggressively that agenda will be pursued.”

Still, the appetite for clean-energy funds in the wake of the November election has been robust, with TAN and ICLN soaring 77 per cent and 68 per cent, respectively. That demand threatens to take the shine off of environmental, social and governance conscious ETFs after a banner year, according to Bloomberg Intelligence.

“Clean-energy exchange-traded funds could bypass the broader ESG category in natural assets in the next few months if current trends hold,” wrote BI analysts Eric Balchunas and Athanasios Psarofagis in a note. “Flows into clean-energy ETFs have breadth and depth that typically portend a grassroots frenzy of buying as investors seek to grab exposure as fast as they can.”