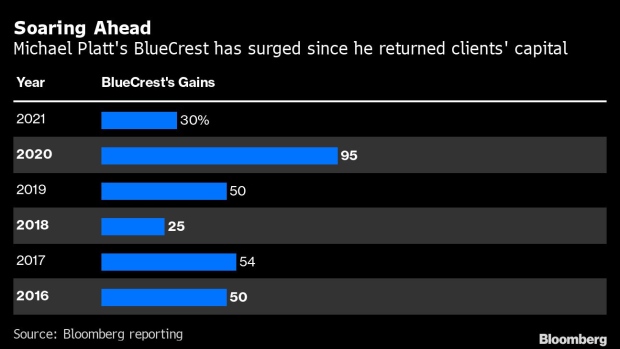 BlueCrest Capital Management is expected to start with 10 people, including at least three portfolio managers, according to people with knowledge of the matter. The firm plans to open an office in the Dubai financial district and trade imminently, said the people, who asked not to be identified because the details are private.

Wheeler and a spokesman for BlueCrest declined to comment.

The firm, which runs Platt’s wealth and that of his partners, joins peers such as Schonfeld Strategic Advisors and Brevan Howard Asset Management in expanding to Dubai as the city emerges as one of the newest hubs for hedge fund talent. Such firms rely on a group of traders running different strategies across multiple investment teams.

BlueCrest is competing for talent in a fiercely competitive industry that’s already engaged in a battle to hire and retain the best portfolio managers. Platt offers some of his traders as much as 30% in payout, one of the most lucrative in the investment management industry. Payouts to hedge fund traders tend to range from 8% to 20%, on average.

Wheeler, who worked as a macro money manager within Citadel’s Global Fixed Income business in London, left the firm last year. He had previously planned to start his own hedge fund with money from billionaire George Soros but shelved the plan in 2019.

Platt, whose wealth is estimated by the Bloomberg Billionaire Index at $12.3 billion, has guided his firm to become one of the best performers in the industry ever since he decided to return clients capital in 2015. BlueCrest made about 30% last year and gains have ranged between 25% and 95% since 2016, giving the firm the resources to hire and expand.