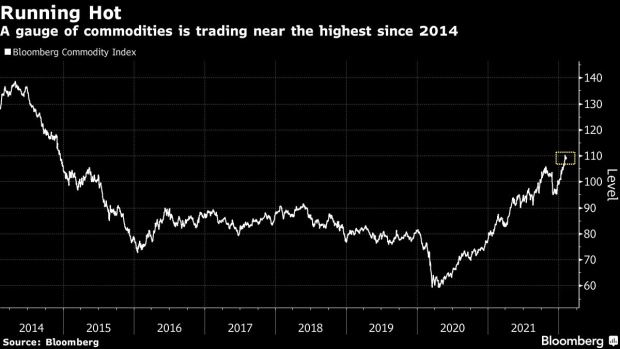 (Bloomberg) -- Private investment firm BlueCrest Capital Management, co-founded by billionaire Michael Platt, has been on a hiring spree for traders who can cash in on a blistering rally in commodities, people familiar with the matter said.

In recent months, the firm has added more than seven portfolio managers who can trade across commodities, the people said. BlueCrest didn’t immediately respond to a request for comment.

Commodities from crude oil to copper and aluminium are at multi-year highs due to supply shortages, creating trading opportunities for firms after the asset class had fallen out of favor among some hedge funds in recent years. The global transition from fossil fuels to cleaner sources of energy has also fueled demand for metals, making trading in the space more lucrative.

BlueCrest hired its first metal-focused traders in April last year and has since added a slew of commodities specialists, poaching talent from firms including rival hedge fund Millennium Management and commodities merchant Gunvor. Recent hires include Jason Greenberg, a cross-commodity trader, Lewis Jones, an oil trader, and Edward Pisano, a commodities trader formerly with Engelhart, the people said, adding that more are expected to join over the coming months.

Jersey-based BlueCrest has come under regulatory scrutiny recently after the U.K.’s financial watchdog said it intends to fine the firm 40.8 million pounds ($55.3 million) for favoring partners in an internal fund over external investors.

The firm posted gains of nearly 30% in 2021, but it wasn’t exactly clear how much commodities contributed to that performance. Hedge funds have been trying to emulate the success of multi-strategy firms such as Millennium Management and Citadel, creating strong demand for traders who specialize in areas such as commodities.

Commodities-focused hedge funds raised about $9.6 billion last year, triple the amount they collected a year before, according to eVestment data.

Last year, BlueCrest also hired Harish Tulsi, a former energy derivatives trader at Morgan Stanley, and Charlie Sussman, the former co-head of global oil trading at Bank of America Merrill Lynch, according to a person familiar with the matter and their LinkedIn profiles.