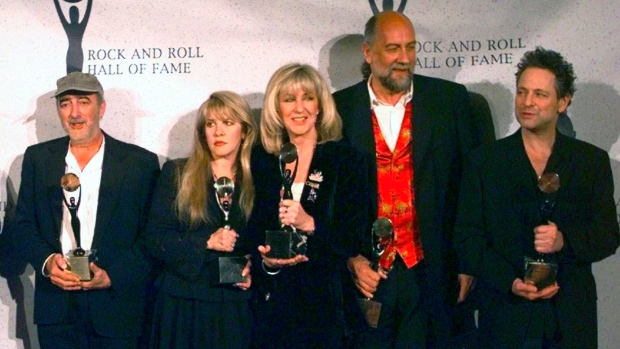 Members of Fleetwood Mac, from left; John McVie; Stevie Nicks; Christine McVie; Mick Fleetwood; and Lindsey Buckingham hold their awards after the group was inducted into the Rock and Roll Hall of Fame in New York on Jan. 12, 1998. , The Canadian Press

Bertelsmann SE’s BMG snapped up rights to most of Fleetwood Mac’s music after the band’s hit song “Dreams” went viral on social media.

BMG acquired drummer Mick Fleetwood’s royalty interests in more than 300 recordings including “Landslide” and “Go Your Own Way,” according to a statement Thursday. Terms of the deal weren’t disclosed.

“Dreams” shot back into the charts last year after a video of a man skateboarding along a highway while drinking raspberry juice and lip-syncing to the 1977 soft rock song became a social media sensation. In about eight weeks, “Dreams” generated 2.8 billion views on TikTok, was streamed 182 million times and helped sell 86,000 Fleetwood Mac albums in the U.S., BMG said.

The value of songs and recordings has soared in recent years after streaming dragged the music industry out of a deep slump. A lot of the recent signups to platforms like Spotify and Amazon Music are older users who want to listen to the hits of their youth.

The BMG deal is the latest in a flurry of music rights acquisitions as artists cut off from touring look to raise cash.

“This acquisition highlights the value of timeless recordings in a streaming market which is increasingly benefiting established rather than newer artists,” Justus Haerder, an M&A executive at BMG, said in the statement.

Fleetwood Mac have sold more than 120 million records and were inducted into the Rock ‘n’ Roll Hall Of Fame in 1998. BMG represents artists including The Rolling Stones and Kylie Minogue.