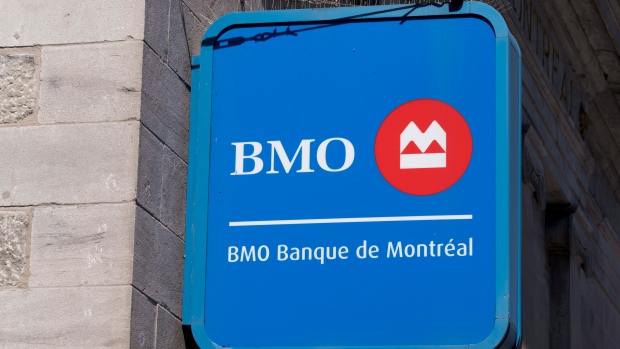 TORONTO -- The Bank of Montreal saw its third-quarter profit grow four per cent to $1.25 billion even as it set aside more money for bad loans.

On a per share basis, BMO's earnings amounted to $1.86, compared with $1.80 per share during the same period last year.

"We had good performance across our operating groups, particularly in personal and commercial banking and BMO Capital Markets," CEO Bill Downe said in a statement.

"Our performance year to date reflects our focus on the customer and strong operating discipline."

Barclays analyst John Aiken says the results were better than he had expected.

"Generally, BMO reported a solid quarter with few areas that we can poke holes in," Aiken said in a note to clients.

"While energy related provisions were up sequentially (from the second quarter), BMO is simply playing a bit of catch-up and there did not appear to be any significant deterioration in the domestic consumer portfolio."

BMO was the first of Canada's biggest banks to report its third-quarter earnings, and if other banks report similar results, Aiken says that will "take some of the wind out of the sails" of those with concerns about oil patch-related loan losses.

"While credit was expected to be a significant theme in the quarter, we no longer believe that energy exposures are driving valuations and consumer credit remained benign," Aiken said.

Royal Bank will report on Wednesday, followed by CIBC and TD Bank on Thursday.

Scotiabank is slated to report on Aug. 30, and National Bank wraps up the earnings parade on Aug. 31.