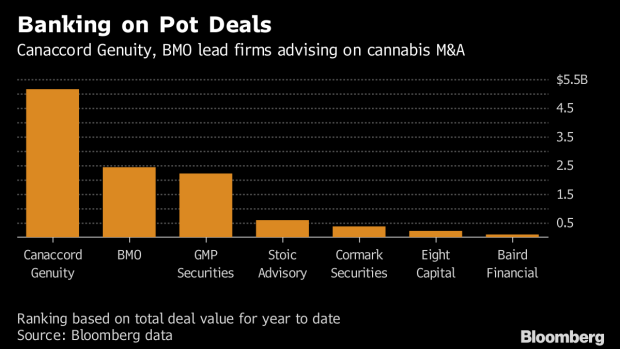 (Bloomberg) -- Bank of Montreal is emerging as the most aggressive of Canada’s big banks in the cannabis industry after landing a mandate to advise on the largest takeover in the sector.

The deal propels BMO Capital Markets into second spot for advising on Canadian pharmaceutical acquisitions -- the category in which medical marijuana resides -- behind Canaccord, according to data compiled by Bloomberg. Bank of Montreal last month advised Hiku Brands Company Ltd.’s on its announced C$287.7 million bid to buy WeedMD Inc. Canaccord ranks No. 1 after advising on four deals with a combined value of $5.15 billion.

Cannabis is one of the few bright spots for equity financing in Canada, which is down about 60 percent from a year ago, according to Bloomberg data. The industry is valued at about C$31 billion on Canadian exchanges and is rapidly consolidating ahead of the legalization of recreational marijuana in the country later this year.

Canaccord ranks No. 2 for arranging overall stock sales in Canada this year, mainly from its leadership position in helping cannabis companies on their equity financings. More than a third of 37 Canadian deals Canaccord has advised on this year were for marijuana companies, according to Bloomberg data, extending the firm’s streak as top adviser in that industry. Bank of Montreal ranks third for overall stock sales in Canada while Toronto-Dominion Bank is top.

To contact the reporter on this story: Doug Alexander in Toronto at dalexander3@bloomberg.net.

To contact the editors responsible for this story: Michael J. Moore at mmoore55@bloomberg.net, David Scanlan at dscanlan@bloomberg.net, Jacqueline Thorpe