Bank of Montreal’s average price target has soared the most among Canada’s big banks in a year marked by surging financial stocks, as analysts point to the scale of its U.S. operations and the prospect of profit growth as interest rates rise.

The consensus on the lender’s share-price target has jumped 43 per cent from a year ago, hurtling past its peers as rate hikes loom, with the Bank of Canada expected to kick off a tightening cycle Wednesday, the day after BMO reports first-quarter earnings. Markets anticipate further Bank of Canadia rate increases through 2022, and tightening by the Federal Reserve as well starting this month, bringing the prospect of expanding lending margins.

BMO and Toronto-Dominion Bank could have the most to gain from rate hikes, with their large loan books and exposure to the U.S. market amid tightening monetary policy. Business in the U.S. accounted for about a third of revenue in 2021 for BMO and TD, compared with about 25 per cent for Royal Bank of Canada and less at the other three banks, data compiled by Bloomberg show.

BMO also made the largest acquisition ever for a Canadian bank when it struck a deal to buy San Francisco-based Bank of the West in December, a move that would double its retail presence in the U.S. should it win regulatory approval. Meanwhile, TD on Monday said it agreed to buy Memphis, Tennessee-based First Horizon Corp., expanding its presence in the U.S. Southeast, in its biggest deal ever.

“The Bank of the West acquisition is one of the biggest drivers of their outlook,” Gabriel Dechaine, an analyst at National Bank of Canada, said in an interview. “The synergies that these banks will get from these acquisitions should help growth in 2023 and beyond.” 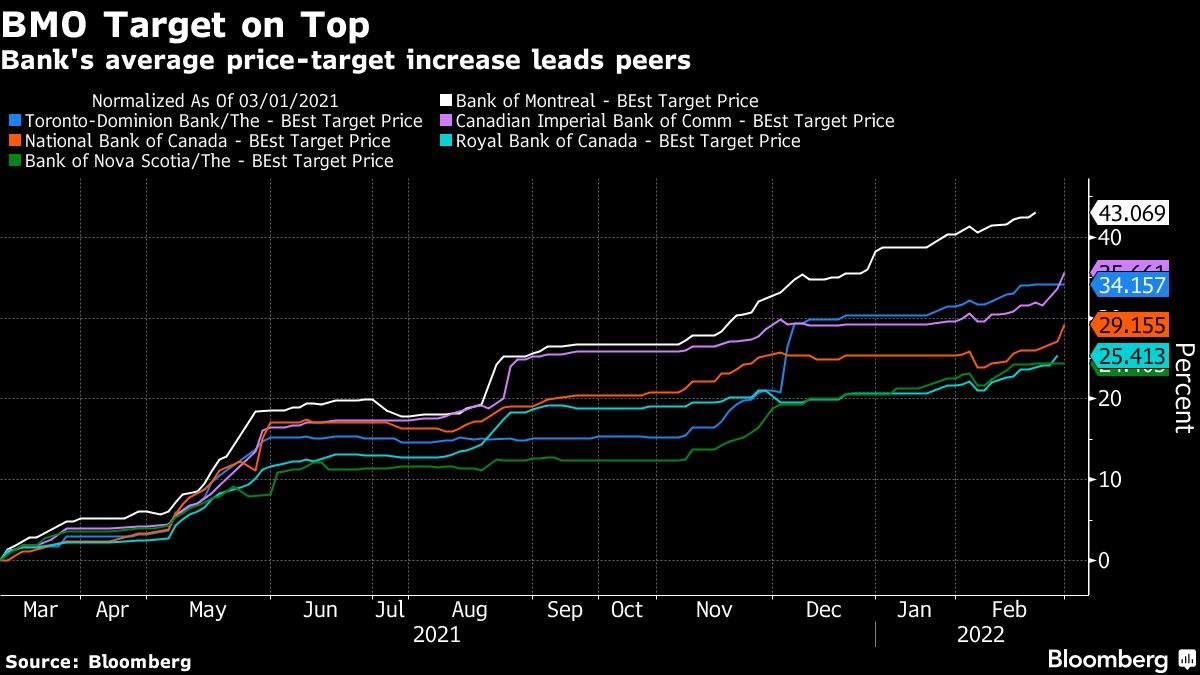 Canadian financial shares are up roughly 27 per cent in the past 12 months, although they’re among the biggest decliners to start the week amid volatility fueled by the Russia-Ukraine conflict. That 12-month performance compares with a gain of about 17 per cent for the S&P/TSX Composite, and it beats all other sectors aside from energy.

BMO shares are up 39 per cent in that period, leading other financial shares. BMO is also the only Canadian bank without an analyst sell rating.