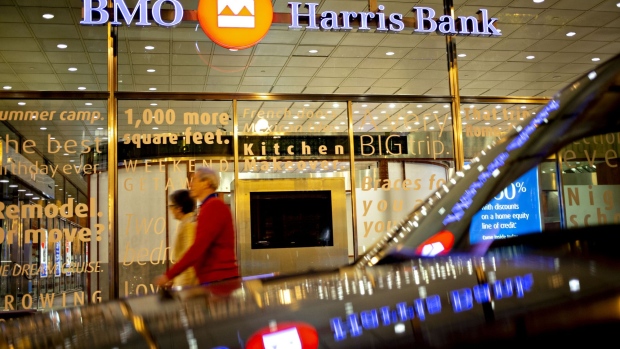 Pedestrians walk outside a BMO Harris Bank branch in the ground floor of the US Headquarters building in Chicago, Illinois, U.S., on Monday, June 11, 2018. , Bloomberg

A poor result by Bank of Montreal’s U.S. unit in the Federal Reserve’s annual stress tests could be related to a restructuring that temporarily increased expenses, according to analysts at Credit Suisse Group AG.

The central bank’s annual exam, released last week, indicated the division’s common equity tier 1 ratio could fall to as low as 5.4 per cent under a “severely adverse scenario.” That was the lowest of the 33 banks reviewed. The unit, known as BMO Financial Corp., currently has a CET1 ratio of 11.2 per cent.

The company has been the least efficient of Canada’s six biggest lenders for years, and Chief Executive Officer Darryl White has vowed to improve productivity. The Toronto-based bank took a $357 million (US$260 million) restructuring charge late last year for increased technology costs and severance stemming from a planned 5 per cent reduction to its workforce, affecting about 2,300 employees.

That cost-cutting effort may have skewed the Fed’s math, Credit Suisse analyst Mike Rizvanovic said in a research note.

“While the Fed does not provide transparency on its underlying assumptions, we suspect that the sizable change in BMO’s pre-provision net revenue might have been driven by the bank’s recent restructuring,” Rizvanovic wrote. That change could have “temporarily increased expenses that may not have been adjusted for” in the stress tests, he said.

The bank is pushing back on the Fed’s analysis. In a statement, it said it expects the Fed to “reconsider the Stressed Capital Buffer (SCB) that results” from its calculations.

A spokesman said the bank doesn’t agree with the Fed’s projections for both revenue and expenses, “as they differ significantly” from previous stress tests and the division’s 2019 results.

Bank of Montreal is the worst-performing large Canadian bank this year, with its U.S.-listed shares falling 32 per cent. They’ve dropped 2.8 per cent since the Fed released the stress test results after the market closed on June 25.

“At this stage, we believe the primary impact will be one of perception that will cause head scratching for Canadian investors, which we believe will lead to a cautious reaction,” National Bank Financial analyst Gabriel Dechaine wrote in a research note.

The results aren’t reflective of Bank of Montreal as a whole and don’t have any bearing on the bank’s ability to pay a dividend, he said.

“At worst, assuming the Fed doesn’t review its calculations as BMO has requested, it may simply mean the bank needs to move capital into the U.S. subsidiary,” Dechaine wrote.

Two other Canadian banks with large U.S. divisions fared better in the stress test. Royal Bank of Canada’s unit would have a CET1 ratio of 13.6 per cent under the extreme scenario, while Toronto-Dominion Bank’s would be the fourth highest of the group, at 16.2 per cent.

In releasing the results last week, the Fed capped dividends at the largest 33 banks at current levels. The central bank said it might conduct another exam using a harsher economic scenario later this year, limiting firms’ ability to gauge prospects for dividends for the rest of the year.