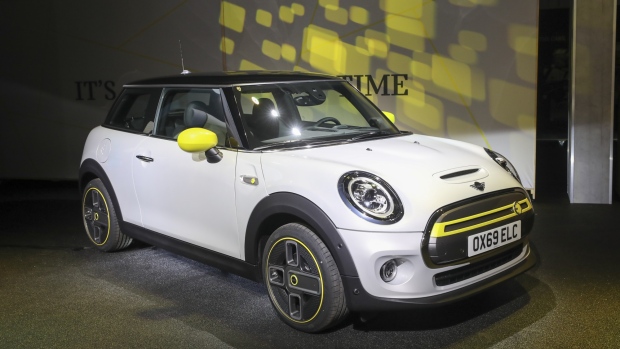 BMW AG’s first electric Mini will hit the streets by the end of the year, targeting urban buyers and giving the German manufacturer more ammunition to compete with Volkswagen AG’s ID.3 hatchback and Tesla Inc.’s Model 3.

The 32,500 euro (us$36,400) car adds an electric motor and battery to the existing three-door Mini Cooper SE, which was developed with a battery version in mind, the Munich-based carmaker said Tuesday after unveiling the vehicle in Rotterdam.

BMW has pledged to produce the model, with a driving range of as much as 270 kilometers (168 miles), at its Oxford plant in England until at least 2023 despite the U.K.’s planned exit from the European Union, which could complicate the trade of vehicles and parts.

The battery Mini is BMW’s second all-electric car after the i3 city car, which was unveiled in 2013. Disappointing sales for the model meant the electric car buzz stayed around Tesla and VW had time to catch up. VW started taking paid reservations for its ID.3 in May for first deliveries by the middle of next year. The base version of that model costs less than 30,000 euros and has a driving range of 330 kilometers. Tesla’s Model 3, priced from 44,500 euros in Germany, went on sale in Europe in February and can drive as far as 409 kilometers on a single charge.

Carmakers are facing the difficult task of developing a costly electric model lineup while demand remains hard to predict. Battery-car sales in Europe rose 48 per cdnt last year, but at just over 200,000 vehicles, they made up a fraction of the 15.6 million new car registrations. The high cost of batteries also makes electric cars far less profitable to manufacture than combustion-engine vehicles.

BMW is planning to have a dozen battery models in its stable by 2023, with an electric version of its X3 sport utility vehicle up next in 2020. The carmaker is taking a cautious approach to the market by producing the cars at the same plants that make combustion vehicles. This will help it meet tougher regulation on emissions while at the same time allow flexibility to adjust production. For the moment, electric cars are relatively expensive and some customers are put off by patchy charging infrastructure.

BMW’s strategy contrasts with VW’s full-on retooling of a number of factories to make only electric cars as part of a 30 billion-euro spending spree aimed at getting 70 electric models on the market by 2028.