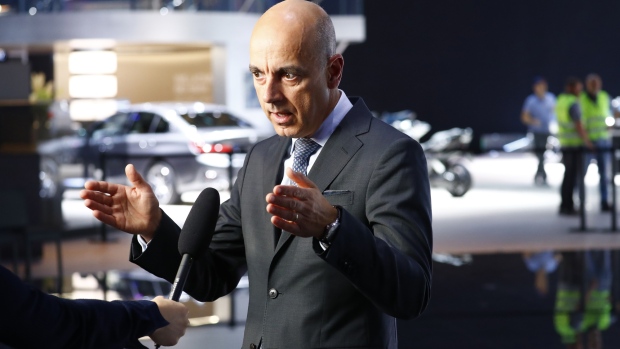 Attendees inspect a BMW X7 sports utility vehicle, manufactured by Bayerische Motoren Werke AG (BMW), during the second media preview day of the IAA Frankfurt Motor Show in Frankfurt, Germany, on Wednesday, Sept. 13, 2017. The 67th IAA opens to the public on Sept. 14 and features must-have vehicles and motoring technology from over 1,000 exhibitors in a space equivalent to 33 soccer fields. Photographer: Simon Dawson/Bloomberg , Bloomberg

That’s up from about 65,000 last year, which is expected to grow to roughly 110,000 vehicles this year. The jump is largely thanks to the X7, which hit dealerships in March and comes with a standard 340-horsepower engine and options including a 4.4-liter V8.

“The important topic for us is how do we get our profitability up,” Peter told reporters in Munich, emphasizing growing i3 electric car sales in light of criticism leveled at SUVs as gas guzzlers. “This is a worldwide growing segment.”

BMW is in the middle of a 12-billion euro ($14 billion) cost-cutting drive to combat rising costs in the shift to electric cars, with demand wobbles adding to the challenges of executing the industry’s generational transformation. BMW’s second-quarter operating profit tumbled 20%, against a backdrop of surging capital expenditures for retooling factories to switch between battery-powered and conventional vehicles.

The global car market is performing “worse than expected” as economies slow this year, according to Peter, who still sees the premium segment and BMW sales to rise next year.

Tensions over how to execute the electric-car shift already toppled former BMW Chief Executive Officer Harald Krueger after just one term, with former production head Oliver Zipse taking the helm in August. Zipse foresees a gradual increase in demand for electric cars, making a flexible production setup pivotal. The company plans to have 25 electric and hybrid models by 2023, with over half of those being fully electric.

BMW was “committed” to reaching tough new rules in the European Union from next year on carbon dioxide fleet emissions, he said.

Deliveries for the company have held up comparatively well, thanks to a record new and revamped models to rise 1.9% through August. The company, also facing fallout from a potential hard Brexit at its Mini city car plant in the U.K., expects earnings before tax for the year to fall “well below” 2018 levels. It’s due to report third-quarter earnings Nov. 6.

To contact the reporter on this story: Oliver Sachgau in Munich at osachgau@bloomberg.net

To contact the editors responsible for this story: Anthony Palazzo at apalazzo@bloomberg.net, Elisabeth Behrmann