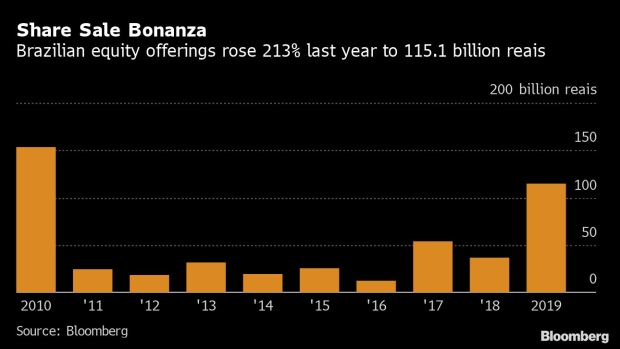 (Bloomberg) -- Brazil’s development bank is considering holding off on the sale of its stake in JBS SA until after the beef giant reports record-breaking earnings late next month, people with direct knowledge of the matter said.

BNDES, as the state bank is known, expects a strong fourth-quarter report to boost pricing in the offering of its JBS shares, the people said, asking not to be identified because talks are private. A final decision on timing may be made next week, they said.

The bank, which is exiting investments in private companies to replenish state coffers, was waiting to complete the sale of shares in oil giant Petrobras before restarting talks on terms of the JBS offering. One of the points to be defined is whether it will offer the stake in one tranche or two, the people said. Separately, Sao Paulo-based JBS is looking at options for listing shares in the U.S.

BNDESPar, the bank’s investment arm, holds 21.3% of JBS. Based on Thursday’s closing price, that stake would be worth 15.3 billion reais or about $3.5 billion. JBS shares were down 1.9% at 12:45 p.m. in Sao Paulo Friday. Both BNDES and JBS declined to comment on the offering.

JBS is scheduled to report fourth-quarter results at the end of March. Analysts expect earnings before items to reach a record high as China’s battle to fill a protein gap created by the spread of African swine fever pushes up export demand and prices around the world.

“JBS should post strong results, potentially acting as a near-term stock catalyst,” Morgan Stanley’s analyst Ricardo Alves wrote in a report from Feb. 4, reiterating the equivalent of a buy rating for the shares.

BNDES became JBS’s largest shareholder after the Batista family by putting up billions in funding for acquisitions that cemented the company’s place as the world’s biggest meat supplier. In 2017, Joesley Batista admitted to paying bribes to politicians in return for facilitating transactions with BNDES.

To contact the editors responsible for this story: James Attwood at jattwood3@bloomberg.net, Daniel Cancel