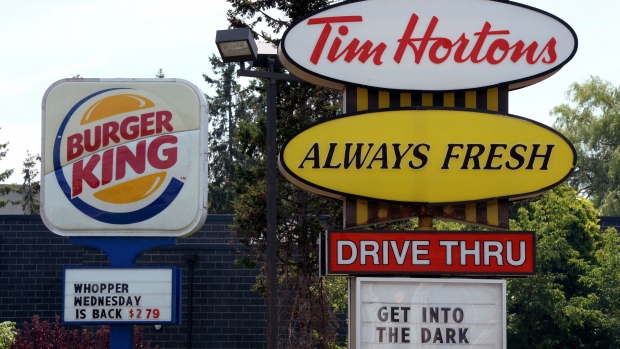 We’ve got fast food on the brain this morning as Tim Hortons owner Restaurant Brands International Inc (QSR.TO) announced it has made a friendly deal to buy Popeyes Louisiana Kitchen Inc (PLKI.O) for US$1.8B in cash.

The plan is apparently to spread the allure of Louisiana-style fried chicken and buttermilk biscuits worldwide. Mind you, for Restaurant Brands International and its aggressive Brazilian backer 3G Capital, the transaction may be small potatoes.

“Do not expect Restaurant Brands to chase only the small fish,” Eight Capital - formerly Dundee Capital Markets - said before the deal was announced. “Investors would probably benefit from thinking bigger with respect to QSR's next target. For example, Yum! Brands, although much bigger, appears to fit several of QSR's criteria.”

Yum! (YUM.N), based in Louisville, Ky. has more than 43,500 KFC, Pizza Hut and Taco Bell restaurants in 135 countries and territories. It sports a market cap of US$25-billion versus US$13-billion for Restaurant Brands.

The more elderly among us may be espousing kale and matcha tea in a frantic effort to slow time but cognoscenti speak well of the bird at Popeyes. Commodities producer Mike Attenborough notes that top chefs favour the succulent treat. There are, by the way, more than 400 calories in a “bonafide spicy” breast Popeyes. And 560 in a dozen onion rings. Louisiana has the fourth-lowest life expectancy among U.S. states.

3G has also been thwarted, for now, in an attempt to combine its food conglomerate Kraft Heinz Co (KHC.O), with consumer products firm Unilever (UL.N), whose stock has slumped 9 per cent in New York this morning.

Finding a hybrid model that works

The great debate: What happens when clients see their fees for the first time?

The great debate: Providing value for the dollars

We’re sticking with nutrition at 12:30 p.m. ET when we plan to connect with Sylvain Charlebois, professor of food distribution and policy at Dalhousie University in Halifax. His latest survey of consumer food risk perception indicates that most Canadians, especially those with medical problems, worry that labels are misleading. Seafood vendors are notorious culprits but dodgy olive oil can also threaten diners with allergies.

Food companies bombard us with health messages but a lot of that hard sell may represent wasted advertising dollars. At 10:30 a.m. ET we’ll be joined by Pranav Yadav, CEO of Neuro-Insight, an outfit that measure brain activity to help marketers. Segment producer Sarah Traynor says the company tracks brain activity while someone is watching, for example, a TV commercial to get data on exactly what parts of the brain are “lighting up.” Yadav says “he could have saved four companies a combined US$100-million in advertising during the Super Bowl with his services.”

DEAL WITH THE DRAGON

Finally, with President Trump threatening to shake up trade relationships, we’re focusing on the need to ensure Canada doesn’t get left out in the cold. Ottawa has begun exploring a pact with China. Sarah Kutulakos,  executive director of the Canada China Business Council, told us this morning that Beijing has been trying to strike a deal since 2012 but the previous government dithered, partly because it had ambivalent feelings about the regime running the world’s second-largest economy.

And at 10:10 a.m. ET, we get the take of Christopher Balding, an economics professor at Peking University HSBC School of Business. He’ll walk us through the untapped opportunities and potential pitfalls of chasing a deal with the dragon.