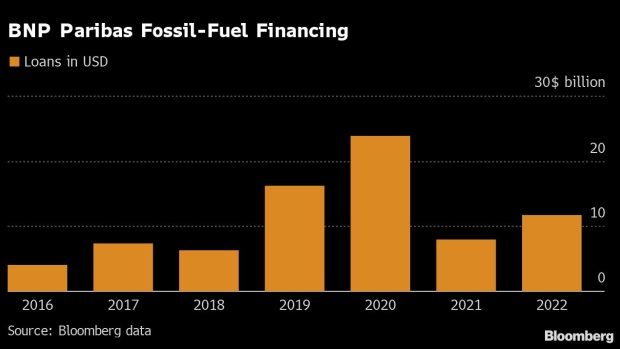 (Bloomberg) -- BNP Paribas SA’s targets for reducing funding of fossil fuels are inadequate as they leave room for firms like TotalEnergies SE to increase their output, activists including Reclaim Finance said.

The Paris-based lender announced Tuesday that it would reduce its funding of oil extraction and production by more than 80%, to less than €1 billion ($1.1 billion) by 2030. The bank based the target on the amount of cash it says goes to financing the fossil-fuel activities, rather than the overall amount lent to the companies.

“These targets only cover part of the financial services — loans, not equity and bond issues — and they allow short maturity loans that would be repaid before 2030,” Reclaim Finance said in an e-mailed statement. “While meeting these targets will inevitably require the exclusion of many of the bank’s clients over time, BNP Paribas will be able to keep others in its portfolio, regardless of the size of their business or their plans for fossil fuel expansion.”

Since the adoption of the Paris Agreement on climate change in 2016, the bank has lent some $73.5 billion to the sector, making it the top European financier of hydrocarbon energy firms, according to data compiled by Bloomberg. It was also one of the top European arrangers of bond financing to the sector.

The bank is facing a potential legal challenge by activists including Friends of the Earth for not respecting its so-called “duty of vigilance,” a French legal obligation on companies to prevent the negative effects of their businesses.

“If those commitments are the only answer to our formal notice, we can already say that they are absolutely insufficient,” said Justine Ripoll, campaigner at Notre Affaire A Tous, one of the organizations that has said it may sue the bank.

BNP Paribas said it aims to boost the volume of loans dedicated to low-carbon energy production more than 40% by 2030. The bank is Europe’s top arranger of green bonds, arranging funding worth $19.5 billion in 2022, data compiled by Bloomberg show.

The targets “do not include all of BNP’s financing services to the fossil fuel industry, including the underwriting of bonds,” said Lorette Philippot, private finance campaigner at Friends of the Earth France. “Also, nothing prevents BNP from lending money to companies that still develop oil and gas extraction projects.”

The targets released Tuesday rely on the bank monitoring the uses to which funds lent are put, with the aim of moving from fossil-fuels to non-polluting forms of energy.

“The inclusion of clauses restricting the use of funds in financing contracts is a good way for the bank to signal to its clients its desire to see them withdraw from certain activities,” said Lucie Pinson, Director of Reclaim Finance. But “as the money is fungible, BNP Paribas cannot guarantee that it will not support its clients’ oil activities.”