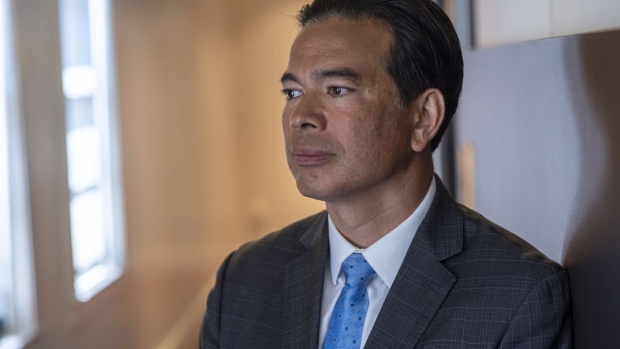 Rob Bonta, California's attorney general, after a Bloomberg Technology television interview in San Francisco, California, U.S., on Wednesday, June 23, 2021. California faces a pivotal test in its defense of gun-control laws that were struck down by a judge in San Diego, as the state squares off in court against firearms advocates. , Bloomberg

Rob Bonta said that his office has the ability to send out written reminders on the state’s policies. “We have found that in the past, clarity from enforcing agency about the duties and obligations and putting it on paper and seeing our seal and our signature on it helps encourage compliance,” he said in a Bloomberg interview Thursday. “We haven’t done that at this point, though.”

In 2018, California became the first state to require a minimum number of female directors on boards of public companies. Under the law, companies whose principal offices are based in the state had to have at least one female board member by the end of 2019 and two by the end of 2021 if the corporation has five directors, or three if it has six or more directors.

The state is facing several lawsuits against both the gender requirement and a separate law requiring at least one board member from an underrepresented groups. The conservative advocacy group Judicial Watch has filed suit against the gender requirement, claiming it’s unconstitutional because it violates the state’s Equal Protection Clause. A trial began last month in state court in Los Angeles, and a ruling may come in weeks or months.

The Alliance for Fair Board Recruitment, a group led by longtime conservative activist and affirmative-action foe Edward Blum, has also challenged state laws on board diversity.

The California Secretary of State posts reports on the status of compliance with the law. The state may impose fines, ranging from $100,000 to $300,000 per violation. So far, there have been few signs of enforcement.

For those that don’t adhere to the law, “there are other steps that we can take.” The laws “aren’t optional,” Bonta said, “they’re required. So if there’s a failure to comply, then we certainly could take enforcement action.”

Pressed on whether enforcement could take place this year, Bonta said: “We don’t have plans at this moment, but we could.”