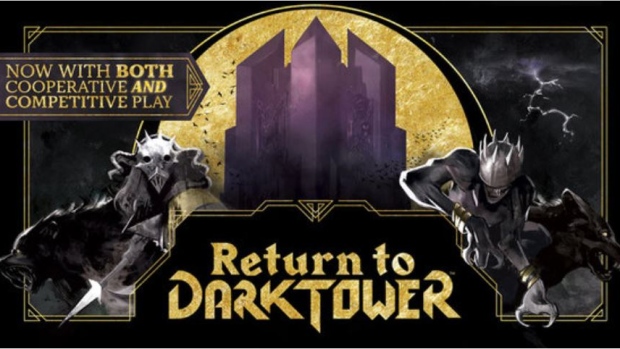 In 1981, Milton Bradley Co. released what may be the most Generation X board game ever. The Dark Tower—a fantasy adventure with flashing lights and sound effects emanating from a titular plastic tower—was a huge hit with kids. It even had its own, slightly weird television commercial featuring Orson Welles.

Four decades later, those kids are entering middle age, some with children of their own whose hands seem welded to smartphones. Perhaps out of nostalgia or a last-ditch effort to engage their offspring, those Gen Xers are now looking back to a time when fun didn’t require a glowing screen.

But what was cool during the Reagan administration may fall flat in the 21st century, and childhood copies of favorite games have probably disintegrated in your mom’s attic.

Enter Restoration Games, one of several board game makers trying to capitalize on the tabletop gaming renaissance. Restoration is remaking and reissuing some of the treasured games of old—both for wistful Gen Xers and their more discerning children.

Restoration’s planned Dark Tower reboot, Return to Dark Tower, incorporates an app into gameplay, and its tower—with glowing symbols that reveal enemy locations and assign quests—is more complex than that of the old version. The tower can also send little plastic skulls tumbling onto the game board—always a bad sign for someone.

“We had to figure out how to make it impressive in 2020,” said Rob Daviau, Restoration’s co-founder. Daviau spent three years perfecting the new version, working with a team of co-designers that included Isaac Childres, who created Gloomhaven, the top-rated title on Board Game Geek, the internet’s largest community of hobby gamers.

“You want to relive your childhood, or share your childhood with your own children,” Daviau said. “You see this in movies, Broadway, television: the constant rebooting of things from the past. Board games are really no different.”

If Sharad Puri’s reaction is any measure, Daviau’s efforts may have succeeded.

As an 11-year-old, Puri said he was obsessed with Dark Tower. “I would set it up and just play with it for hours,” he said. Fearful his little brother would take some of the pieces, Puri said he once locked him in his room during a game.

Now 48 and working as an IT manager in Bloomfield Hills, Michigan, Puri said he pledged US$225 on Kickstarter for the top-level version of the new Dark Tower, which includes additional miniatures, upgraded tokens, and other content that won’t be part of the retail release.

“The instant it went up, I backed it,” Puri said of the fundraising campaign. “I was like, ‘Oh, I am all over this!’”

Board game publishers have increasingly turned to Kickstarter for help. Games are the largest funded category on the crowdfunding site, with tabletop games holding the biggest share of that, bringing in US$176 million last year.

Singapore-based CMON, a major player in hobby board gaming with almost US$12 million in annual revenue, has run several multimillion-dollar Kickstarter campaigns for its games. Restoration Games launched a three-week campaign for Return to Dark Tower on Jan. 14, accumulating US$4 million.

For Restoration, the appeal lies in the ability to translate excitement among enthusiasts into needed capital.

After the first copies are delivered to backers, the game will eventually appear in stores, where it will cost a whopping US$150. That could end up being a critical revenue stream: The company’s other big Kickstarter reboot, Fireball Island: The Curse of Vul-Kar, has sold 50,000 copies in stores, the company said, twice the number that were delivered to crowdfunders.

Restoration was founded in 2016 to secure the rights to classic game titles and reintroduce them with updated rules. Part of that process is determining if a game is in the public domain, or if there’s someone who needs to be paid for permission.

“Some have [intellectual-property] holders, and others don’t,” Daviau said of old games. “Part of what we do is figure out the status of each game and find all the people who might, in some way, be a stakeholder.” He declined to say which games required payouts.

During his 14 years working at game giant Hasbro, where he labored on such mainstream titles as Axis & Allies and Heroscape, Daviau developed the “legacy” concept, first implemented in Risk Legacy, a 2011 update to the classic of the same name.

Now, with four years under his belt at Restoration, Daviau said the company is releasing a handful of games each year and has annual revenue of about US$2 million. Some of the other titles he’s reintroduced may ring some bells, such as Stop Thief, a game of deduction in which players are detectives trying to catch criminals; others, such as the racing game Downforce, may not be as familiar.

Industry site ICv2.com reported in April that North American sales of tabletop games scored US$1.5 billion in 2018, while Research & Markets has forecast that the segment could reach US$12 billion globally by 2023.

“I’d never have predicted the growth we’ve had over the past 10 years,” said Milton Griepp, chief executive officer of ICv2. John Coveyou, the founder and CEO of Genius Games and the owner of Artana Games, said the ubiquity of technology is a major driver of board gaming’s resurgence.

That’s the reason he publishes games such as Cytosis, whose compete to try and detoxify a human cell by building enzymes and hormones. Then there’s Tesla vs. Edison: War of Currents, in which players vie to start the first successful electrical company.

Daviau believes there’s still room for growth in the board game industry, even for such smaller publishers as Restoration Games and others serving the hobby game niche. But US$150 per game?

“There’s a big gap between being in the hobby markets and being on the shelf in Target,” Daviau said.