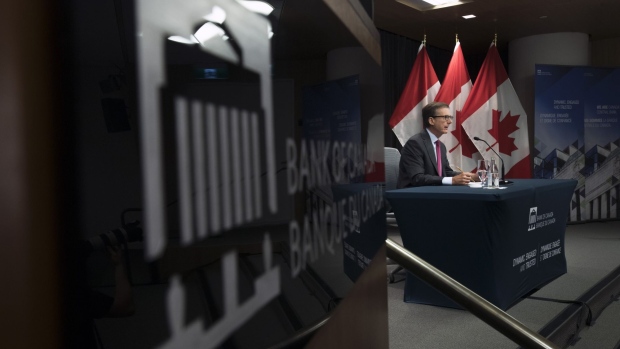 Tiff Macklem, governor of the Bank of Canada, speaks during a news conference in Ottawa, Ontario, Canada, on Thursday, Sept. 10, 2020. The Bank of Canada reiterated its pledge to keep interest rates at historic lows for years to come, but dialed back its willingness to take even more aggressive action and said it could adjust its bond purchase program. Photographer: Adrian Wyld/Canadian Press , Bloomberg

The Bank of Canada is scaling back or halting a number of its emergency liquidity operations, saying they’re no longer required as market function continues to improve.

The central bank will discontinue its bankers acceptance facility before the end of the month and reduce the frequency of its extended term repo operations to bi-weekly, according to a statement Thursday. Policy makers also plan to end the Canada Mortgage Bond Purchase program.

It’s the most significant change to the central bank’s emergency response program since markets began to return to normal in April. As funding demands waned, the bank had already begun to step back. Holdings under the three programs dropped to about C$170 billion (US$129 billion) from a peak of about C$220 billion in June.

“Market functioning and liquidity are back to pre-pandemic operational levels,” said Ian Pollick, head of fixed income, currency and commodity research at Canadian Imperial Bank of Commerce. “So quantitative easing and unconventional policy must adapt to that reality.”