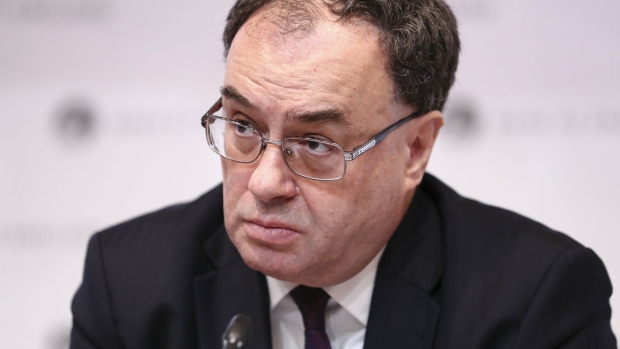 (Bloomberg) -- Bank of England Governor Andrew Bailey signaled the U.K.’s inflation outlook is likely to worsen when policy makers complete their forecasts in two weeks, noting a darkening picture on both wages and natural gas prices.

Political tensions over Ukraine and the risk they could lead to persistently elevated gas prices pose “a very great concern” for inflation in the U.K, Bailey told lawmakers on Wednesday, hours after data showed overall consumer prices unexpectedly accelerated to 5.4%, the highest since 1992.

He also acknowledged that mounting wage pressures posed the risk that the U.K. drifts into a so-called wage-price spiral, where wages and prices keep chasing each other higher. One group of local authority garbage collectors secured an 11% pay rise this week.

Told by one MP that the public would not forgive the BOE if it ignored how serious inflationary wage pressures had become, Bailey said: “Please don’t think we don’t think these are serious pressures. They are.”

The BOE is expected to raise interest rates to 0.5% in February to curb inflation. But while record vacancies are putting pressure on wages, pay is not expected to keep pace with prices, causing a household income squeeze.

Bailey said signs that companies are having to pay up for new staff could lead to more general wage inflation. “If that leads to a situation where people are doing broadly the same job for different levels of pay the risk is that leads to an upward drift in inflation,” he said.

Market expectations for future gas prices have shifted significantly higher since the BOE’s last set of forecasts in November, with prices now expected to remain high until late 2023 – over a year longer than thought.

Bailey said the outlook reflected mounting tensions between Russia and NATO over the Ukrainian border. “That is a big shift and is relevant to the point about transitory shocks,” he said. “If we are going to have a more elevated gas price, that is a source of concern. I have to be honest.”

He added that the cost of living crisis that households face this year could bring down inflation on its own in the longer term, by depressing demand and causing a rise in unemployment as people have less money in their pockets to spend.