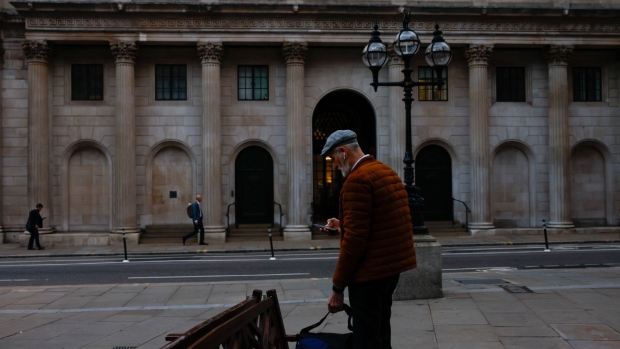 In a speech to the Securities Industry Conference, Ramsden said the impact of the chancellor’s £43 billion package of unfunded tax cuts was “likely to be material for the economic outlook over the next three years.”

The September vote, which was taken just ahead of the mini-budget, incorporated government plans to freeze energy bills but not the tax giveaways, Ramsden said. That means November’s rate decision and economic forecasts from the BOE will take full account of how that package impacts the outlook for inflation and growth.

The fiscal statement, made on Sept. 23, triggered a plunge in the pound and a government bond sell-off. The BOE had to intervene four trading days later to stabilize markets.

Ramsden was in the minority last month in voting for a three-quarter point hike, explaining in his speech that he saw “more persistent inflationary pressures,” including from the domestic labor market. The committee voted for a half point hike to 2.25%.

Markets are now looking for a rise of around 1 percentage point in November, which would be the largest single move since 1989.

Ramsden signaled that a big hike is coming. “The central question for all nine of us on the MPC is how forceful do we need to be, to ensure inflation does return sustainably to the 2% target in the medium term,” he said.

The government’s timetable threatens to complicate policy. It plans to publish its full fiscal framework with offsetting measures to help pay for the £43 billion giveaway on Nov 23. That would potentially reduce the inflationary impact of the stimulus.

However, those details may not be released until after the Nov. 3 rate decision, leaving policymakers with no option but to incorporate the impact of the tax cuts alone. City economists say they are inflationary.

Ramsden added that the market’s reaction to the government’s fiscal plan will influence its decisions. Market rates have risen sharply since the chancellor’s statement on Sept. 23, driving household borrowing costs up to 13 year highs and raising fresh concerns about household finances.

Policymakers are “acutely conscious” that rate rises run the risk of making the cost of living crisis worse, Ramsden said, but they will have to “stay the course” to grapple with inflation. Inflation is 9.9%, five times the 2% target, and the BOE expects it to peak shortly at 11%.

“Decomposition of the drivers of the shock to yields point to domestic UK factors as driving the increase over the most recent period, which is unusual,” he said.

The government’s energy price freeze will mechanically lower inflation in the short term but increase it in the medium term, Ramsden said. He added that the effect of the tax cuts would be included in the Nov 3 forecast round and decision.

(Updates with comments from the speech from first paragraph.)