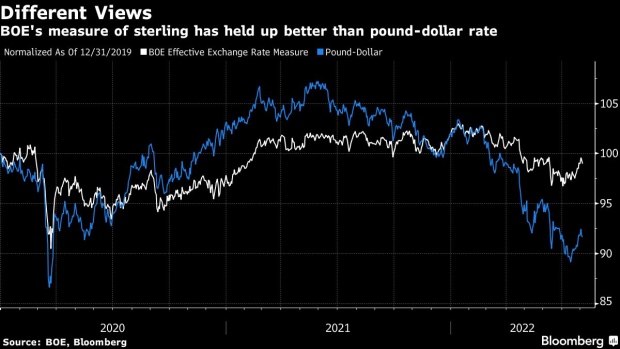 Bank of England Governor Andrew Bailey said the pound’s decline is “not a crisis” for now and that policy makers are watching it along with many other measures to assess the economic outlook.

The UK currency has fallen more than 10% against the dollar so far this year, adding to the cost of imports and things priced the US currency, like oil. Bailey said that for now, officials don’t see the drop as a major problem.

“We don’t target the exchange rate,” Bailey said in an interview on Bloomberg Television. “Recently it’s been a story of dollar strength. I don’t think sterling is in crisis at all.”

While the pound has moved sharply lower against the dollar, it’s held up better on a trade-weighted basket of currencies tracked by the BOE. It’s also rebounded in the past two weeks.

Bailey’s remarks came after the BOE hiked rates by a half-point and forecast a surge in inflation past 13% later this year and a recession lasting well into 2023. The bleak outlook, the governor said, is driven mainly by increasing natural gas prices following the war in Ukraine.

British policy makers have had an aversion to commenting on sterling since 1992, when the pound tumbled out of the European Union’s Exchange Rate Mechanism and triggered a recession. Still, some officials have started to express unease about the UK currency.

Mel Stride, who leads the Treasury Committee in the House of Commons, said in June that sterling’s move “is something we should be concerned about.” BOE policy maker Catherine Mann and former Treasury official Nicholas Macpherson have also raised the issue.

The BOE’s target is to keep inflation to 2%, and Bailey said officials would look at the value of the pound because it’s a “relative price” that feeds into economic models.

“We always have to understand the context at which the exchange rate is moving,” he said.

In a series of interviews with UK broadcasters on Thursday, Bailey expressed more concerns about tightness in the labor market fanning inflation. He noted the workforce has shrunk since the pandemic, mainly because older workers have dropped out of employment, some of them citing long term illness or the lingering effects of the coronavirus.

“We’ve seen a shrinkage in the labor force,” Bailey said. “Firms feel they can raise prices quite easily at the moment. The worst thing that can happen is that inflation becomes embedded. That’s what worries me.”