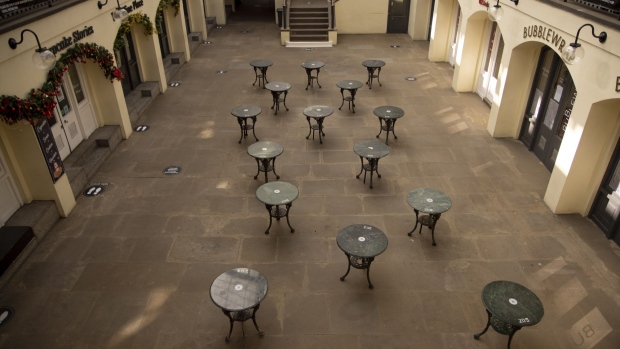 (Bloomberg) -- Bank of England Governor Andrew Bailey said risks to the U.K. economy remain tilted to the downside, a remark that may rein in expectations that policy makers may soon shift toward containing inflation.

Bailey reiterated the bank’s guidance that it doesn’t intend to tighten monetary policy until there’s clear evidence the economy is absorbing excess capacity, and he noted that unemployment is likely to rise and remain higher a year from now. For those reasons, risks are “on balance distributed on the downside, though less so as time goes by.”

“There is a growing sense of economic optimism in markets and in consumer and business measures,” Bailey said in the text of a speech to the Resolution Foundation on Monday. “A note of realism though. Our latest forecast painted a picture of an economy that starts at a lower level of activity.”

The speech follows a sharp rise in U.K. interest rates in financial markets over the past month as Prime Minister Boris Johnson’s campaign to rapidly vaccinate the population from the coronavirus took hold. With the government working to loosen a nationwide lockdown, investors are starting to anticipate when the central bank might shift from supporting the recovery to controlling its strength.

Bailey noted inflation remains below the bank’s 2% target and that before any more “there is a burden of proof we will need on the sustainability of the recovery.”

While the U.K. labor market has adjusted relatively quickly to economic shocks previously, the rise in unemployment was likely to be higher in a year partly because the worst-hit sectors are dominated by younger and lower-skilled workers who may find it harder to find new jobs, he said.

The furlough program, which pays 80% of wages to people whose workplace has closed due to the virus, “will help to preserve viable employment going forwards, and skills specific to particular jobs or companies, which is a good thing,” Bailey said, after Chancellor of the Exchequer Rishi Sunak extended the program until September in his budget last week.

“My expectation would be that this is likely to reduce the peak level of unemployment over the coming months,” Bailey said. “However, some rise in unemployment as the scheme tapers will be hard to avoid.”