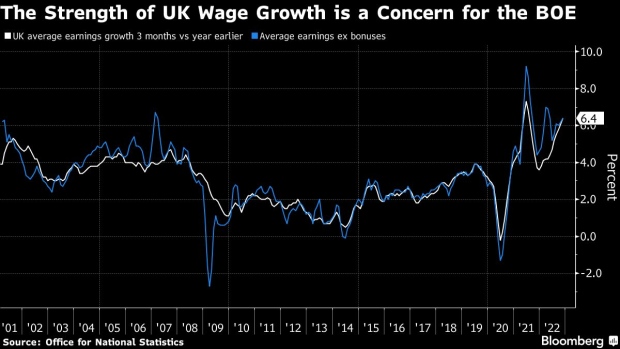 (Bloomberg) -- The Bank of England has agreed a 3.5% pay rise for its 5,000 staff and a one-off 1% salary top-up this year under a sub-inflation deal that has been accepted by the union.

The increase in the overall pay pot will be targeted at lower paid staff to protect them against the worst of the living standards squeeze, with the better-off receiving smaller rises of as little as 1%.

BOE staff will also see the value of their benefits increase by 1% of salary for this year only and given the option of taking the uplift in cash. Governor Andrew Bailey, whose total compensation was roughly £598,000 ($737,510) last year, declined a raise for a second year running.

Unite, which has more than 600 members at the BOE, has accepted the deal, which heads off the risk of a strike. Workers across the public sector, including nurses, teachers and on the railways, are staging walk-outs in protest at below inflation pay offers that have brought much off the country to its knees.

The union stressed that, for lower-paid staff, the package was considerably more generous than the headline 3.5% settlement — and for a few will get close to the current inflation rate of 10.5%.

Not only will they get larger pay rises and the 1% top-up, but staff whose job requires them to be in the office, such as security guards and maintenance, will receive a further £750 payment both this month and next January to cover travel. The BOE also agreed an extra day’s leave, increasing the entitlement to 26 days plus bank holidays, and to extend the company-wide benefits package to include dental insurance.

Like other central bankers, Bailey has called for pay restraint to head off a wage-price spiral. He fears that large pay settlements will only feed into higher inflation as companies try to recover wage costs by raising prices, setting off a damaging feedback loop.

But he has to balance the BOE’s inflation-fighting prerogative with the needs of staff, who are struggling amid a once-in-a-generation cost of living crisis. As recently as 2017, staff threatened to strike.

Given its role in fighting inflation, the BOE settlement threatened to become symbolic, which is why keeping the basic average pay rise under control was critical. Inflation is more than five times the BOE’s 2% target.

A BOE spokesperson said: “We need to strike a balance between maintaining budgetary discipline with public funds, retaining critical skills, and addressing the cost of living pressures facing our staff. For next year, we have agreed a 3.5% pay award budget targeted towards staff lower in their pay scales, and a one-year only non-pensionable benefits uplift worth 1%.”

For the average BOE worker, the package will be worth 4.5% this year including the benefit uplift — half the rate of inflation and less than the 5% the government agreed for 5.5 million public sector workers in 2022.

The settlement is also considerably lower than the 7.2% growth in average private sector regular pay. Inflation is expected to drop this year now that gas and food prices are falling.

(Updates with details of benefits.)