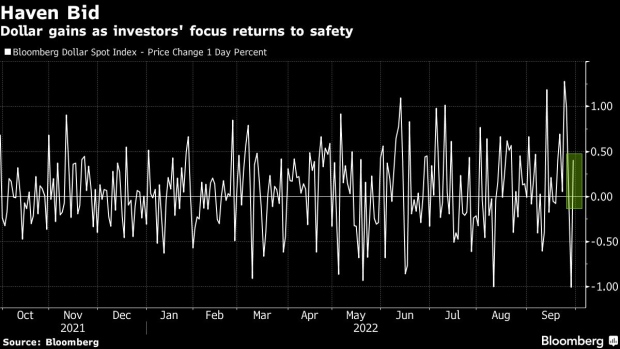 (Bloomberg) -- The Bank of England’s debt purchases restored a semblance of calm to global markets. But it didn’t last long.

By the start of European trading Thursday, market players were already gearing up for more volatility in the days ahead. The reason? They say the UK central bank’s intervention doesn’t address investors’ key concern: inflation.

“Inflation remains the primary driver of bond market directionality. Volatility will likely continue until there is more certainty that inflation has peaked,” said Todd Schubert, head of fixed-income research at the Bank of Singapore Ltd. “The direction of the pound and BOE is a short-term sideshow.”

Accelerating price pressures have been the biggest bugbear for global markets this year, as they set off an aggressive wave of tightening by central banks that has torpedoed everything from stocks to credit and commodities. With few signs that inflation is about to ease, policy makers are likely to keep jacking up rates, setting the stage for more losses across asset classes.

Recent data suggest that inflation has yet to peak, which may back the case for more interest-rate hikes. Figures on Thursday showed consumer prices in Germany’s North Rhine-Westphalia region increased 10.1% on the year in September after gaining 8.1% the previous month.

The BOE’s emergency move did boost risk sentiment in Asia on Thursday as most benchmark equity gauges notched up gains, credit markets rallied.

The UK central bank’s announcement coincided with a warning from the People’s Bank of China cautioning against currency speculation, which helped to arrest an eight-day slide in the onshore yuan.

The moves by the UK and China raise “the specter of a USD positioning squeeze into month-end, or the very least, some short-term consolidation,” TD Securities strategists including James Rossiter wrote in a note. “For now, this is likely to be shallow and temporary as there are no good alternatives to the USD at the moment.”

By early afternoon in Singapore the euphoria had already started to fade. The pound slumped more than 1% after rallying 1.5% the previous day when the UK central bank began its buying operation. The Bloomberg Dollar Spot Index unwound some of Wednesday’s losses as investors flocked back to the world’s reserve currency.

Analysts expect UK assets to remain under pressure in the near term. Goldman Sachs Group Inc. lowered its forecasts for cable and recommended investors sell gilts as “weakness will endure unless policy durably changes on either the monetary or fiscal side to restore market confidence in the UK policy mix,” strategists including Allison Nathan wrote in a note.

“We just saw another huge easing of financial conditions that means central banks need to raise rates even more -- and they are determined to do so,” Michael Every, strategist at Rabobank, wrote in a note. “Don’t think the volatility is over yet: vastly more lies ahead.”

(Updates with latest market moves throughout)