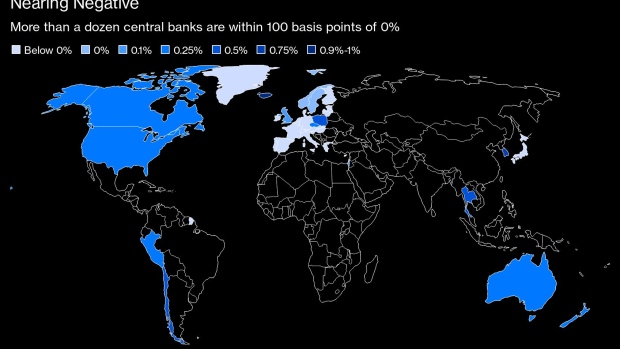 (Bloomberg) -- The Bank of England is assessing the potential impact of negative interest rates on the economy and financial system -- though “to be clear, reviewing and doing are different things,” Chief Economist Andy Haldane said.

“Currently we are in the review phase,” he said in an webinar hosted by the Confederation of British Industry Tuesday. “Our approach to these issues is not to rule anything out as a matter of principle, and to review all of our options.”

The comments come amid a growing debate about the possibility that the U.K. could be the next country to introduce negative rates. The BOE is studying how low it could cut amid the coronavirus crisis and isn’t excluding the idea of taking borrowing costs below zero, Governor Andrew Bailey told lawmakers last week.

He also said his position had changed “a bit” since entering the pandemic, but the policy had received “pretty mixed reviews” elsewhere.

Haldane said that BOE would look at the policy’s impact on the financial sector, where it would squeeze on margins between lending and deposit rates, and how it would affect confidence in the economy.

Officials are looking at all their options as the fallout from the pandemic leaves the U.K. economy in what could be its deepest recession in three centuries. Output probably won’t bounce back as quickly as it plunged and may not return to pre-virus levels until the end of next year, Haldane said.

“There will be, understandably, a period of prolonged caution in spending by both households and companies,” he said. The government should focus on instilling confidence to get people spending, he said, as the U.K. now appears to experiencing the paradox of thrift.

Going off of the bank’s latest projections, jobs might not return to their pre-coronavirus levels until 2022 or 2023, he said. “This is a sort of V, but it’s a fairly lopsided V” with risks to the downside, he said.