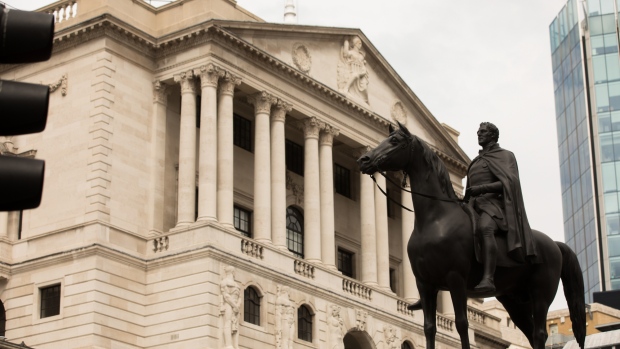 A statue of the Duke of Wellington on horseback stands in front of the Bank of England (BOE) in the City of London, U.K. , Bloomberg

The Bank of England signaled it will focus on the next phase of Brexit negotiations as two policy makers continued to push for an immediate interest-rate cut.

Officials said it was too early to tell whether the clearer path for the U.K.'s departure from European Union on the back of Boris Johnson's election win will improve sentiment. They repeated that monetary policy may need to add stimulus if Brexit uncertainty remains entrenched or global growth failed to stabilize.

“It was possible that household and business sentiment could pick up in the near term,” the bank said in minutes of its December meeting published Thursday. “Further out, the responses of companies and households would depend on developments in the next stage of the Brexit process, including negotiations about the nature of, and the transition to, the U.K.'s future trading relationships.”

The BOE cut its projection for fourth-quarter growth to 0.1 per cent from 0.2 per cent and said it still expects inflation to slow to around 1.25 per cent in the spring, well below the two per cent target. It also noted that the labor market might be loosening, though it remains tight.

Still, officials expect inflation and growth to pick up over the next few years, and repeated that if that forecast materializes, a series of limited and gradual rate hikes will be needed. It will revisit its forecasts next month.

The meeting is the first since Johnson’s decisive election victory last week, and officials noted a reduction in domestic political uncertainty.

The election result all but guarantees the U.K. will leave the EU with a transition deal in place on Jan. 31. The focus then turns to the December 2020 deadline for a trade deal, which Johnson said he won't extend.

The decision means the BOE’s key rate has stayed at 0.75 per cent throughout 2019, as U.K. officials stayed out of a wave of global easing that saw their peers in the U.S., Eurozone and elsewhere lower borrowing costs amid concerns over trade tensions and a global slowdown.

Still, traders expect the BOE to act next year, with money markets pricing in around an 80 per cent probability of the central bank cutting by December 2020. Some economists see a move coming as soon as the first quarter.

Hanging over the meeting is speculation over the identity of the successor to Carney, who is due to leave the bank at the end of next month. The appointment process has been long and delayed by the election, but investors are now on high alert for the decision as soon as this week.