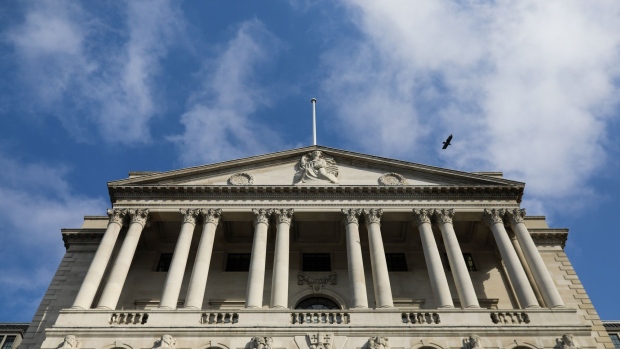 The Bank of England kept its monetary stimulus unchanged as it awaits the outcome of trade talks between the U.K. and European Union, while beefing up support for small businesses to get them through a pandemic that’s dragging on for longer than expected.

The nine policy makers, led by Governor Andrew Bailey, voted unanimously to hold their benchmark interest rate at 0.1 per cent and their total asset purchase target at 895 billion pounds (US$1.2 trillion), stressing that they can accelerate or slow bond-buying as needed.

They also extended a loan program geared toward small and medium-sized businesses to help lending to the real economy, running it an extra six months until October.

The decision comes two weeks before the Brexit transition period ends on Dec. 31, with the nation yet to strike a trade deal with the EU, and was accompanied by a warning that the latest pandemic restrictions will hit the economy at the start of 2021.

The BOE’s Monetary Policy Committee previously stressed that it has plenty of headroom to boost stimulus further -- potentially including negative interest rates -- if the outlook deteriorates.

The central bank’s economic projections assume the U.K. moves immediately to a free trade agreement with the EU on Jan. 1, and officials had little to say on the latest developments.

They did signal a willingness to let monetary stimulus stay in place for some time, even if inflation picks up rapidly -- which it would likely do if Brexit talks fail and the pound drops.

“Compared with previous periods during which non-negotiated Brexit outcomes had been possible, the economy was starting from a weaker position with greater spare capacity, increasing the Committee’s tolerance for a temporary overshoot in inflation,” the MPC said.

Like central banks elsewhere, the BOE is focused on ensuring borrowing costs stay low as the government builds up a massive debt burden in fighting the crisis. The European Central Bank boosted its bond-buying program last week, and the Federal Reserve said on Wednesday that it’ll keep providing the U.S. economy with plenty of support well into the future.

Optimism over a U.K. trade deal with the EU has climbed in recent days, with the European Union’s chief Brexit negotiator, Michel Barnier, saying Thursday talks with the U.K. have made good progress.

Still, Britain is reeling from its worst economic collapse in three centuries during the initial wave of the coronavirus struck. The BOE expects another contraction of more than one per cent in the fourth quarter.

It extended its asset-purchase plan by 150 billion pounds in November, and said it expects those to start in January and be completed by the end of 2021. The pace will likely stay around the current level of just under 4.5 billion pounds a week initially, but officials said they had the “flexibility to slow the pace of purchases later.” Buying at the current rate would see the total reached in the third quarter.

Officials sounded a note of cautious optimism on the pandemic as vaccines are rolled out.

That “would be expected to have a positive impact on activity and inflation,” they said. “Although all members agreed that this would reduce downside risks, they placed different weights on the degree.”