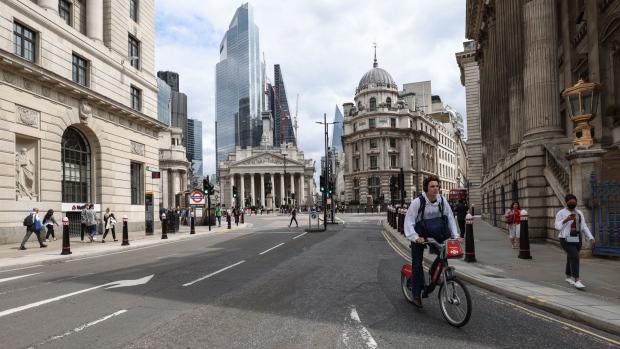 The Bank district in the City of London, U.K., on Thursday, Aug. 5, 2021. The Bank of England (BOE) may move a step closer to tightening monetary policy, unwinding 900 billion pounds ($1.2 trillion) government bond purchases while also opening the possibility that borrowing costs could be pushed below zero. Photographer: Hollie Adams/Bloomberg , Bloomberg

(Bloomberg) -- Two Bank of England officials moved to reinforce signals of an imminent rise in U.K. interest rates to curb inflation, with one telling households to brace for a “significantly earlier” increase than previously thought.

Michael Saunders, one of the most hawkish members of the Monetary Policy Committee, suggested in remarks published Saturday that investors were right to bring forward bets on rate hikes. Hours earlier, Governor Andrew Bailey warned of a potentially “very damaging” period of inflation unless policy makers take action.

BOE policy makers have historically sought to prepare the ground for rate hikes at least one meeting before opting for a move, through a combination of hawkish speeches and dissenting votes. Saunders was in the vanguard of those pushing for rate increases in both 2017 and 2018.

Bailey, in an interview with the Yorkshire Post, also said he doesn’t anticipate a further increase in unemployment after the government ended its furlough program last month. Economists widely expect the the central bank to consider jobs data following the end of the program before deciding whether to lift rates from the current record low of 0.1%.

A combination of higher energy prices, supply chain disruptions and rising wages in some industries has undercut the BOE’s original view that much of the jump in prices will prove transitory. The central bank last month said it expects inflation to exceed 4% in the last quarter, more than double its target.

Investors have loaded up on bets on faster rate hikes in recent weeks. Markets are almost-fully pricing in the first move by the end of this year and see the benchmark rate hitting 0.75% in 2022.

While Saunders made it clear he’s not trying to pinpoint when the MPC might act, he told the Telegraph newspaper that “it is appropriate that the markets have moved to pricing a significantly earlier path of tightening than they did previously.”

Saunders, a former Citigroup Inc. economist, was one of two MPC members to vote last month to end the BOE’s bond-buying program immediately.

Liz Martins, a senior economist at HSBC Holdings Plc who expects a hike in February, said the said she now sees a chance that Saunders “will vote for a rise in December or even November, and he may not be the only one.”

The central bank expects unemployment to peak at 4.75% in the third quarter, much lower than the worst-case scenarios predicted at the onset of the pandemic.

“They won’t have any hard data for post-furlough at the November meeting,” said Martins. “They will have the October print by the time of the December meeting, so that definitely increases the relative likelihood of a Christmas rate rise.”