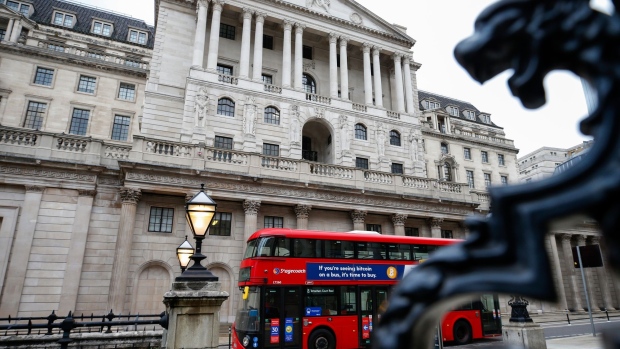 The Bank of England delivered a slightly more upbeat assessment of the U.K. economy, sidestepping an opportunity to cool a surge a market interest rates.

The central bank’s Monetary Policy Committee left the pace of its stimulus unchanged as expected, noting economic output fell less than anticipated in January while governments in the U.K. and U.S. both outlined plans for new spending. Minutes of the meeting mentioned “upside” risks seven times, up from two in February.

The decision indicated that the BOE led by Governor Andrew Bailey is tolerating a surge in bond yields around the globe, seeing it as a reflection that the economic mood is improving. That matched the U.S. Federal Reserve’s stance and stood in sharp contrast with the European Central Bank, which last week moved to curb the market move with a pledge to step up the pace of asset purchases.

“The bank seems relatively comfortable with the idea that the market moves reflect an improving growth and inflation outlook rather than an adverse and undesirable tightening in financial conditions,” said Luke Bartholomew, senior economist at Aberdeen Standard Investments.

BNN BLOOMBERG POLL:
Are you worried central banks will fall behind on inflation?

Bonds have fallen in recent weeks, pushing up yields, on speculation that stronger economic growth will push up inflation.

The yield on 10-year gilts remained near a one-year high at around 0.88 per cent after the BOE statement. While borrowing costs remain near historic lows, they’re now more than four times the levels seen at the start of the year.

The central bank reaffirmed its target for asset purchases of 895 billion pounds (US$1.2 trillion) and maintained the weekly pace of its stimulus program. It left the key lending rate at a record low of 0.1 per cent.

The MPC said that overall financial conditions are “broadly unchanged” since February, describing prices of risky assets as “resilient” and noting an increase in the value of the pound.

“The minutes of the Bank of England’s March meeting did little to suggest any alarm about the recent rise in bond yields. Still, it offered a reminder to investors that it’s ready to loosen again if the recovery disappoints and there’s a higher-than-usual bar for tightening policy.”

A report from the bank’s regional agents also showed signs of consumer demand re-emerging. While sales of clothing and cars were weak, sports and leisure goods were selling strongly along with outdoor furniture and gardening equipment. The bank’s contacts said there’s been a strong pickup in domestic holiday bookings. Manufacturing output remained weaker, but most expect an improvement in the next year.

The sunnier tone adds to evidence that the BOE’s will likely upgrade its forecast for the economy significantly in May.

Still, policy makers said the outlook for the economy remains “unusually uncertain” and that the MPC was ready to act either by tightening or loosening policy.

They joined the Fed and ECB in delivering assurances that there’s few signs yet of a need to tightening of policy, reiterating that they had no intention to move without seeing evidence that a recovery is both absorbing excess slack in the labor market and leading to a sustained rise in inflation.

Most economists don’t expect that to happen anytime soon. One notable exception is the BOE Chief Economist Andy Haldane, who has warned about inflation, saying a “tiger has been stirred” that may “prove difficult to tame.”

His view is backed by a run of good news on the economy in recent weeks, driven by Prime Minister Boris Johnson’s rapid vaccination program, which may allow most coronavirus rules to lapse by the end of June. Chancellor of the Exchequer Rishi Sunak also extended a tax holiday on housing purchases and benefits to furloughed workers in his budget earlier this month, which economists say will hold down unemployment.

There’s substantial risks too. While the recent extension of the furlough program will limit economic scarring, it will still leave unemployment substantially higher compared with the pre-pandemic years.

Britain’s post-Brexit relationship with the EU could be another drag on growth prospects. U.K.’s trade with the bloc plunged in the first full month after it left the common customs area.

“There was a range of views across MPC members on the degree of spare capacity in the economy currently, whether demand would outstrip supply during the recovery from the pandemic,” the BOE said in its statement.